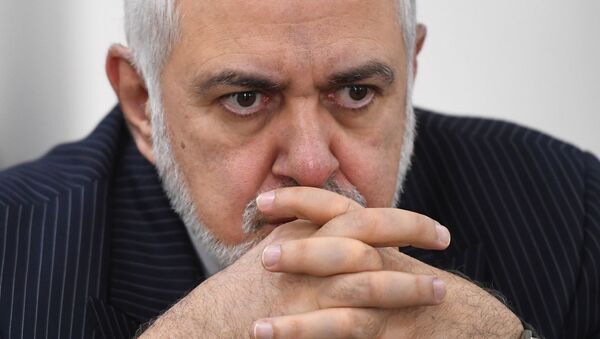 Oleg Burunov
All materialsWrite to the author
Earlier this week, Javad Zarif made it clear that Tehran will return to full compliance with the 2015 Iran nuclear deal if the US lifts its sanctions against the Islamic Republic.

Iranian Foreign Minister Javad Zarif told reporters on Friday that the US demand for Tehran to reverse its nuclear steps first "is not practical" and "will not happen".

The remarks come after he accused the US of violating the 2015 Iran nuclear deal, also known as the Joint Comprehensive Plan of Action (JCPOA), "for no reason", urging Washington "to remedy its wrong".

This came as the top Iranian diplomat on Tuesday underscored that Tehran will resume full compliance with the Joint Comprehensive Plan of Action if Washington lifts sanctions that currently hinder the Islamic Republic’s cooperation with foreign countries.

“The US should stop its sanctions pressure, there should be no obstacles on the way to our cooperation with other countries. If these problems are solved, then we will come back to comply fully with the JCPOA”, Zarif said at a press conference, held after his meeting with Russian Foreign Minister Sergei Lavrov.

The Iranian foreign minister added that Tehran “will welcome the IAEA [International Atomic Energy Agency] inspectors just as the protocol says” and that his country “will be ready to return to full compliance”.

“That is something that has been said by our leader, the supreme leader. If the United States remove sanctions we will come back to comply with the agreement in full”, the Iranian foreign minister added.

Earlier in January, Zarif urged newly sworn-in US President Joe Biden “to choose a better path" than his predecessor Donald Trump and return America to the JCPOA before the opportunity disappears for the administration.

Zarif, in an opinion piece published in Foreign Affairs, underscored that if the US rejoins the thoroughly negotiated agreement, “Iran will likewise return to full implementation of our commitments under the nuclear deal”.

However, “if Washington instead insists on extracting concessions, then this opportunity will be lost”, according to the Iranian foreign minister.

The remarks followed then-nominee for US Secretary of State Antony Blinken telling a Senate panel that the Biden team is seeking to conclude a new nuclear agreement that would also include the participation of Israel and fellow Gulf states.

In May 2018, the US unilaterally withdrew from the nuclear deal and reimposed harsh economic sanctions against Iran. Tehran responded by pledging to gradually backtrack on its JCPOA commitments and resume uranium enrichment if other JCPOA signatories failed to help it bypass US sanctions.

Iran Agrees to Grant IAEA Inspectors Access to Two Former Atomic Sites
In 2019, citing the failure of these efforts, Tehran began abandoning some of its commitments to the agreement, scrapping limits on uranium stockpiles and enrichment levels. The Islamic Republic nonetheless maintains that it has no intention of developing nuclear weapons, and has said that it would fully rejoin the JCPOA if the US does the same.

In 2015, Iran signed the JCPOA with China, France, Germany, Russia, the UK, the US, and the EU. It required Tehran to curtail its nuclear programme and downgrade its uranium reserves in exchange for sanctions relief.