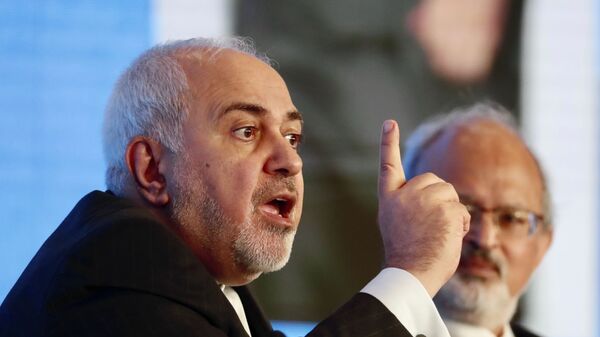 Tim Korso
All materialsWrite to the author
The new US administration earlier indicated its interest in returning to the Iran nuclear deal, but newly sworn-in Secretary of State Antony Blinken suggested that the Islamic Republic, which had been suffering from US sanctions over the past three years, should be the party to make the first step in reaching the agreement.

Iranian Foreign Minister Javad Zarif has taken to Twitter to lecture US Secretary of State Antony Blinken on why it should be Washington and not Tehran to make first commitments to return to the Joint Comprehensive Plan of Action (JCPOA), also known as the Iran nuclear deal.

The Iranian diplomat reminded Blinken that it was the US which first violated the provisions of the JCPOA and UN Security Council Resolution 2231, while starting to punish those who adhered to them. He also accused the US of blocking deliveries of food and medicine to the coronavirus-hit Islamic Republic, although Washington claimed it had allowed humanitarian shipments to the sanctioned country.

Zarif went on to stress that, unlike the US, Iran had abided by the terms of the nuclear deal it signed in 2015 and only started scaling back on its commitments after spending a year under American sanctions – a move that the diplomat called foreseeable. He also reminded Blinken that Trump's much-touted "maximum pressure" campaign essentially failed in achieving its goals, suggesting Washington should not forget that lesson.

Earlier, the newly sworn-in American secretary of state revealed that Washington plans to start returning to its nuclear deal commitments only after Iran itself begins adhering to its provisions. Tehran gradually withdrew from the JCPOA commitments, first by slightly exceeding enrichment levels to little over 3% and lifting limits on nuclear fuel stockpiles and only recently ramping up the enrichment to 20%, which is still a far cry from weapons-grade material.

Iran repeatedly stated that Washington violated the accord by slapping sanctions on the country and strongly hinted that the US would have to compensate for Tehran's financial losses from economic measures before the Islamic Republic considers a return to compliance with the nuclear deal. President Biden expressed an interest in rebuilding the JCPOA, but never elaborated on under which conditions and whether Washington intends to compensate Iran for the time spent under sanctions.