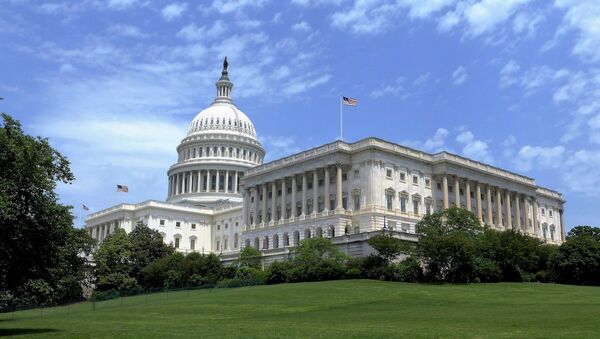 WASHINGTON (Sputnik) - An armed resident of the state of West Virginia has been arrested near the US Capitol, Washington DC Metropolitan Police spokesperson told Sputnik on Thursday.

The US Capitol Police (USCP) said in a statement that the incident occurred on Wednesday afternoon when a man exited his vehicle near the US Congress complex.

"The USCP Officer made contact with the suspect and asked if there was a gun in the vehicle, to which the suspect advised there was a pistol in the center console. The suspect was placed under arrest and transported to headquarters for processing," the statement said.

The man charged with carrying a pistol without a license, possession of unregistered ammunition, and unlawful possession of a firearm, the statement added.

“71 y/o man arrested with gun and 20 rounds of 9mm ammo.. while parked in intersection near Rayburn US House Office Building”, Scott MacFarlane wrote. The suspect’s name and intentions have not yet been revealed.

​The Rayburn House Office Building, with sits southwest of the US Capitol, is one of three office buildings constructed for the House of Representatives. The Capitol survived an attack by former President Donald Trump’s loyalists on 6 January and has been heavily protected by thousands of National Guardsmen since then.