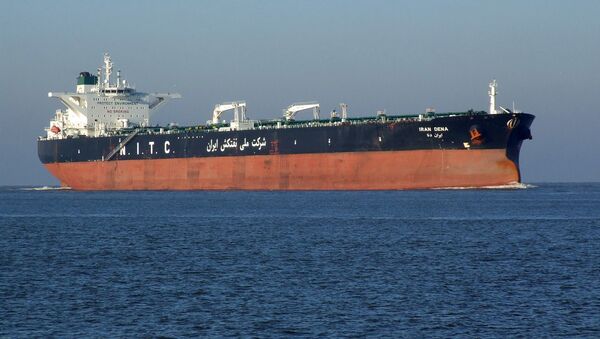 Morgan Artyukhina
All materialsWrite to the author
Tehran’s oil minister, Bijan Zangeneh, recently boasted that Iranian oil exports have increased despite US attempts to block them with sanctions and threats against potential buyers.

According to a report by Bloomberg, the US is trying to seize the contents of an oil tanker it believes to be carrying Iranian oil in violation of US economic sanctions targeting the country’s petroleum exports.

Citing “people familiar with the matter,” the outlet reported on Tuesday that the Liberian-flagged very large crude carrier Achilleas had been reported by its Greek owner under suspicion of having taken on Iranian crude oil. An order to seize the cargo went out just hours before US President Joe Biden was sworn in on January 20.

According to the report, the Achilleas is fully loaded with 2 million barrels - as much oil as Iran produces in an entire day - that it picked up from another ship in Fujairah, United Arab Emirates, in November 2020.

The ship was scheduled to go to Muscat, Oman, but reportedly turned off its tracking system from January 1 until January 13, when it was located off the coast of South Africa. Its present location is reportedly in the South Atlantic.

Earlier this week, Indonesia seized two oil tankers off the island of Batam, near Singapore, on suspicion of oil smuggling. Authorities said they caught the vessels “red-handed” transferring oil. Iran’s PressTV reported that Tehran believed the Iranian-flagged tanker, the MT Horse, was seized over a “technical issue” and has asked for an explanation from Jakarta. The other vessel was the MT Freya, a Panamanian-flagged ship owned by a Shanghai company.

After the administration of US President Donald Trump in 2018 unilaterally withdrew from the Joint Comprehensive Plan of Action (JCPOA) deal, the Trump administration reimposed economic sanctions on Iran with the goal of reducing Iran’s oil exports to zero.

After a group of Iranian tankers slipped through a similar US blockade around Venezuela to deliver much-needed fuel, Washington stepped up its interdiction efforts and began seizing ships suspected of transporting Iranian oil or of intending to deliver refined petroleum products to Venezuela.

Some 1.1 million barrels of seized oil was sold by the US for more than $40 million in October 2020, having come from two other tankers that, like the Achilleas, are Greek-owned but Liberian-flagged.

Both Biden and leaders in Tehran have indicated their willingness to return to the JCPOA treaty, which would lower economic sanctions in exchange for tight limits on the quantity and quality of uranium that Iran could refine, limiting its use to a handful of nuclear power plants and medicinal purposes.

Iran’s oil production has halved since 2018 and US sanctions have greatly frustrated the republic's ability to acquire products such as medicine and to fight the COVID-19 pandemic, despite previous claims by the Trump administration that the sanctions would not affect those key health issues.