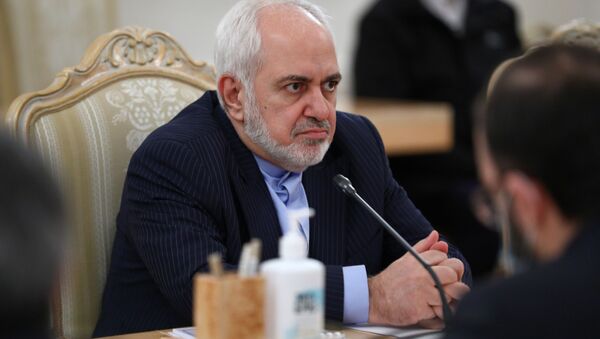 Oleg Burunov
All materialsWrite to the author
Last week, Iranian President Hassan Rouhani pledged that if Washington returns to the 2015 Iran nuclear deal, Tehran "will also fully respect" its commitments under the agreement, widely known as the Joint Comprehensive Plan of Action (JCPOA).

Iranian Foreign Minister Mohammad Javad Zarif has accused the US of breaking the 2015 Iran nuclear deal "for no reason", calling on Washington "to remedy its wrong".

"Why on earth should Iran—a country that stood firm and defeated 4 years of a brutal US economic terrorism imposed in violation of JCPOA & UNSC Resolution—show goodwill gesture first?", Zarif noted in a tweet on Tuesday, referring to the nuclear deal, also known as the Joint Comprehensive Plan of Action (JCPOA).

In another development on Tuesday, Zarif underscored that Tehran will resume full compliance with the nuclear deal if the US lifts its sanctions against Iran. The latter are currently hindering the Islamic Republic from cooperating with foreign nations.

"If these problems are solved, then we will come back to comply fully with the JCPOA. We will welcome the IAEA [International Atomic Energy Agency] inspectors just as the protocol says […]. If the United States remove sanctions we will come back to comply with the agreement in full", Zarif said at a press conference, held after a meeting with Russian Foreign Minister Sergei Lavrov.

The remarks came a week after Iranian President Hassan Rouhani urged new US President Joe Biden to return to the nuclear deal abandoned by Donald Trump, vowing that Tehran will implement its JCPOA obligations if Washington returns to compliance as well.

"The ball is in the US court now. If Washington returns to Iran's 2015 nuclear deal, we will also fully respect our commitments under the pact", Rouhani said in a televised Cabinet meeting.

He spoke after newly-confirmed US Secretary of State Antony Blinken told a Senate panel that Washington would reciprocate in kind to Iran's resumed compliance with the nuclear deal and would later seek a broader agreement that would also cover Tehran's missile programme.

In a separate development last week, the French newspaper Le Figaro cited unnamed sources as saying that members of the Biden team have been negotiating with their Iranian counterparts on the prospects of a US return to the JCPOA for about three weeks now, with talks underway even while Trump was still president.

The source claimed that the alleged negotiations have focused on a "strict and concomitant return" of the two countries to the nuclear agreement.

Biden's National Security Adviser Says Iran's Missile Program Must Be 'On the Table' in JCPOA Talks
A year later, the Iranian government began gradually abandoning its own commitments under the nuclear deal, specifically with regard to uranium enrichment levels and provision of access to the IAEA.

The JCPOA was signed in 2015 by Iran, China, France, Germany, Russia, the United Kingdom, the United States, and the European Union, stipulating the removal of international sanctions from Tehran in exchange for the Islamic Republic scaling down its nuclear programme.