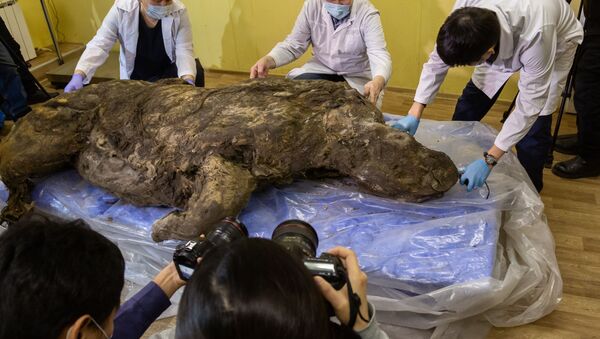 MOSCOW (Sputnik) - A uniquely preserved carcass of an ancient woolly rhinoceros, discovered by scientists in the thawing Siberian permafrost in the Yakutian wilderness, was delivered to the Siberian city of Yakutsk where scientists can begin detailed studies, media outlets reported Tuesday.

Russian scientists have presented to the media the remains of a teenage woolly rhino that died some 20,000 years ago with 80 percent of its organic material still intact, including hair, teeth, horn and even fat, according to the newspaper Siberian Times.

The discovery was made last August in the melting Siberian permafrost in the Yakutian wilderness. The delivery was only made in late January as they had to wait for the road to freeze over, allowing drivers to traverse the difficult terrain.

"The adolescent woolly rhino is approximately 236 centimetres, which is around one metre less than an adult animal", Dr Gennady Boeskorov from the Yakutia Academy of Sciences told the Siberian Times, adding that it was 130 centimeters in height, which is around 25 centimetres shorter than a fully-grown adult.

Scientists believe the teenage rhino died after getting trapped in a bog while running away from human hunters, but the exact cause of death has yet to be established.

This is the second woolly rhinoceros discovered in the Sakha Republic but the first of this age bracket and level of preservation. This gives scientists an opportunity to study the ways in which the rhino grew and developed, shedding light on the organisms.

With the increasingly melting permafrost in the Siberian tundra, such discoveries are becoming more frequent. Concern has been voiced over the possible rejuvenation of ancient bacteria or viruses frozen over the millennia.