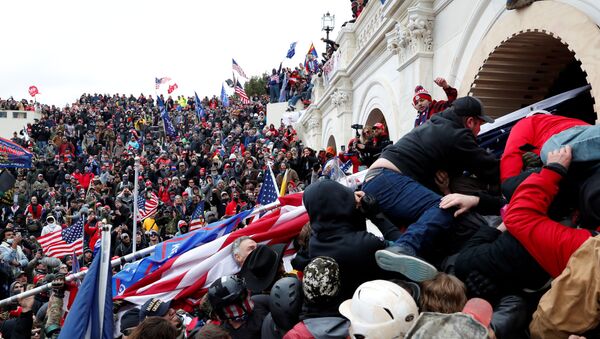 Gaby Arancibia
All materialsWrite to the author
On January 6, Trump loyalists gathered in Washington DC, as congress confirmed the winner of the US election; however, bolstered by calls made at the outgoing president's 'Stop the Steal' rally minutes earlier, hundreds of individuals, in a riot that saw five people killed, stormed the Capitol and temporarily halted proceedings, shocking the world.

At the time of the deadly riot, Steven Sund was the Capitol Police chief. Sund was quickly replaced by Pittman after the former resigned in the fallout over the violent insurrection. Prior to the new appointment, Pittman had served as the assistant chief for Protective and Intelligence Operations.

During a closed-door briefing with members of the House Appropriations Committee, Pittman stated Capitol Police had “failed to meet its own high standards as well as yours,” before noting that she was present to “offer my sincerest apologies on behalf of the department.” 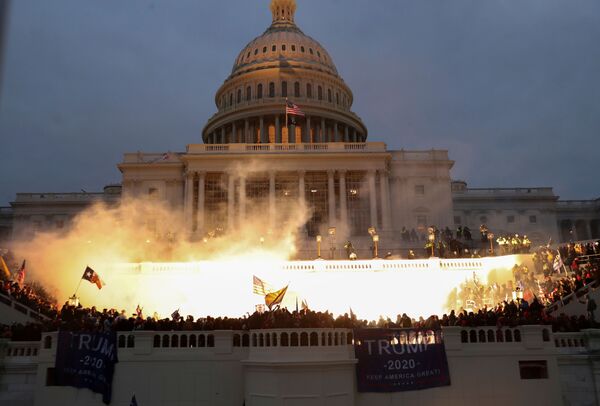 An explosion caused by a police munition is seen while supporters of US President Donald Trump gather in front of the US Capitol Building in Washington, US, January 6, 2021
© REUTERS / LEAH MILLIS

“Let me be clear: the department should have been more prepared for this attack,” Pittman told officials. “By January 4th, the department knew that the January 6th event would not be like any of the previous protests held in 2020. We knew that militia groups and white supremacist organizations would be attending. We also knew that some of these participants were intending to bring firearms and other weapons to the event. We knew that there was a strong potential for violence and that Congress was the target.”

“The department prepared in order to meet these challenges, but we did not do enough,” the official said, before explaining that added measures included requiring all available officers to be on shift, activating SWAT units and upping the number of civil disturbance units, as well as reshaping security perimeters based on instructions received from both the House and Senate sergeant-at-arms, both of whom resigned from their posts in the wake of the deadly riot.

"In my experience, I do not believe there was any preparations that would have allowed for an open campus in which lawful protesters could exercise their First Amendment right to free speech and at the same time prevented the attack on Capitol grounds that day," Pittman noted. "However, I do believe certain challenges the department faced the day of the attack could have been overcome with additional preparation."

Overall, what the force needed, according to reports, was a stiff increase in manpower, a request Sund made to the Capitol Police Board prior to the riot that was subsequently rejected, Pittman said, noting that Sund was, instead, encouraged by the board to reach out to the Washington DC National Guard for added assistance. Ahead of the Capitol siege, the police force only had about 1,200 people working on the site. 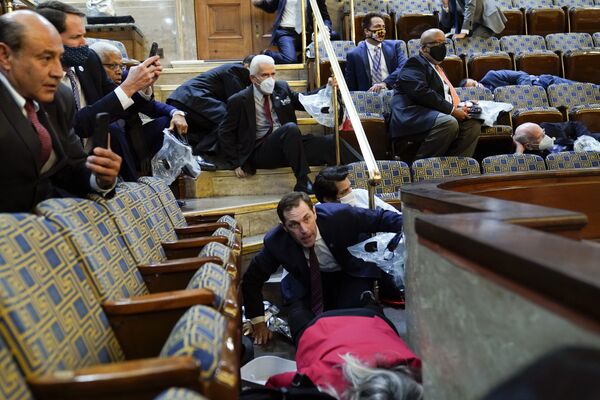 People shelter in the House gallery as protesters try to break into the House Chamber at the U.S. Capitol on Wednesday, Jan. 6, 2021, in Washington
© AP Photo / Andrew Harnik

With Capitol Police spread thin, as armed and violent individuals stormed the federal building, the agency found itself struggling to meet the need of the moment even as additional forces were deployed to handle a pair of pipe bomb reports as well as that of a report of a van filled with explosive chemicals. To make matters more dire, a second request from Sund to the Capitol Police Board to deploy National Guard troops was held off “for over an hour,” Pittman detailed.

Aside from lax preventative measures and insufficient troop figures, Pittman also informed the members of the committee -  which funds the Capitol Police - that officers were not given the proper tools, and that a faulty communication system within the US Capitol prevented officers from understanding what orders were being handed down by leadership.

Pittman stressed that the agency would now take up new measures to better prepare against similar incidences and protect the inhabitants and physical infrastructure. “The US Capitol Police remain steadfast in addressing the new challenges that we face head on,” she said.

Pittman’s remarks came as reports surfaced detailing that the commander of the DC National Guard was prevented from allowing troop deployments to the nation’s capital ahead of the deadly riot, which saw 5 killed, including a law enforcement officer. The Washington Post reported that the restriction was imposed by the US Department of Defense, and that a delay in deployment was the result of local law enforcement not requesting the DC National Guard to prepare a contingency force.