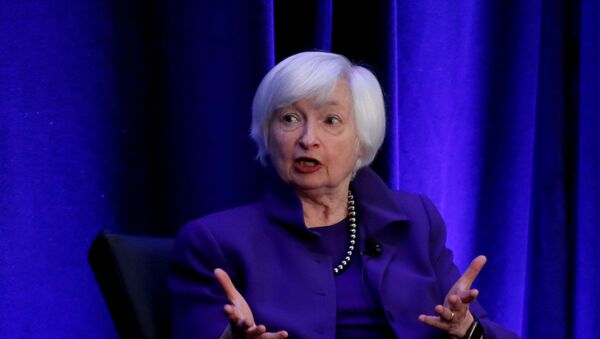 Daria Bedenko
All materialsWrite to the author
Earlier in the month, Janet Yellen, the Joe Biden nominee for Treasury Secretary, was unanimously approved by the US Senate Finance Committee to run the Treasury Department.

The US Senate voted to confirm Janet Yellen as the Treasury Secretary on Monday, with 84 Senators supporting her nomination and 15 saying no after voting was wrapped up.

Yellen will become the first woman to run the US Treasury Department.

She is the third member of the Biden cabinet to be confirmed.

Also on Monday, The US Senate Foreign Relations Committee advanced the nomination of Anthony Blinken for the position of State Secretary, voting 15-3 in his favour. The nomination will head to the Senate floor for a final confirmation vote.

US President Joe Biden announced Yellen as his pick for the job in November 2020, and the Senate Finance Committee unanimously approved her candidacy earlier in the month.

It is unknown when Yellen will take over from current Treasury Secretary Steven Mnuchin. According to reports, she will be sworn in tonight by a Treasury official, and then on Tuesday, ceremonially.

Earlier in January, she pledged to "stay tough regarding US sanctions against Russia" regarding what she described as "Russian actors for territorial aggression in Eastern Ukraine and Crimea and other threats to US national security".

A professor emerita in the Haas School of Business in the University of California, Yellen chaired the Federal Reserve from 2014 to 2018, appointed by former US President Barack Obama.