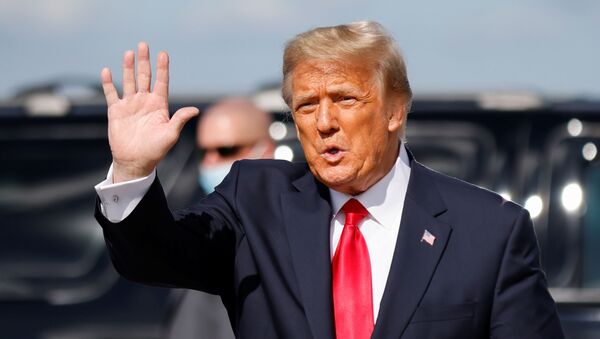 Asya Geydarova
Editor
All materialsWrite to the author
Shortly before Joe Biden was sworn in as the 46th President of the United States, media reported that Trump discussed the idea of forming a third political party, apparently disappointed with Republicans who did not back his claims of election fraud.

According to his 2020 campaign senior adviser Jason Miller, Trump “has made clear his goal is to win back the House and Senate for Republicans in 2022.”

“There’s nothing that’s actively being planned regarding an effort outside of that, but it’s completely up to Republican Senators if this is something that becomes more serious,” Miller said.

Media reports on social media claimed, citing people familiar with his thinking, that Trump was “talked out” of his alleged plans, and was persuaded by his aides that diverting efforts both to a third party and primaries “makes no sense”.

There’s also the fact that threatening a third party while simultaneously threatening primaries makes no sense, which some folks gently pointed out to him.

The Wall Street Journal newspaper reported on Tuesday that the ex-president spoke to his aides and some people close to him about starting his own political entity, reportedly intending to dub it as the “Patriot Party.” However, the news was never officially confirmed.

Meanwhile, an impeachment trial against Trump is set to kick off the week of February 8, Senate Majority Leader Chuck Schumer said Saturday. The former president was impeached by the House last week over “incitement of insurrection”, after thousands of his supporters breached the Capitol building on January 6 in a bid to stop the congressional certification of Joe Biden's election victory. Trump has denied the charges and said his remarks were “totally appropriate.”

The former commander-in-chief is now residing in Palm Beach, Florida, where he moved after leaving DC early on Inauguration Day. Trump decided not to attend Biden's inauguration, becoming the first president in decades to skip the official ceremony.

Chances are high Trump could try another presidential bid in 2024.