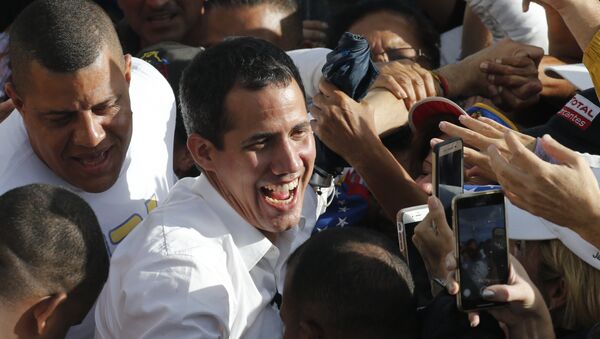 Despite the last week's European Parliament's resolution for EU governments to maintain Guaido's position as head of state, a joint statement by the bloc's members described him as part of the democratic opposition in the country.

The European Union has announced that, despite regarding Juan Guaido as a "privileged interlocutor", it no longer considers him an interim president of Venezuela.

The 27 members of the block said in a joint statement that Guaido is a part of the democratic opposition, despite a recent European Parliament's resolution for EU governments to maintain Guaido's position as head of state.

"The EU repeats its calls for... the freedom and safety of all political opponents, in particular representatives of the opposition parties elected to the National Assembly of 2015, and especially Juan Guaido," the statement said following a meeting of EU foreign ministers in Brussels.

Last week, Guaido thanked the European Parliament for recognising him as president of Venezuela's National Assembly, arguing that the 2020 parliamentary elections were fraudulent.

The EU, however, stopped referring to Guaido as the Venezuela's "acting president" after his National Assembly leadership mandate expired earlier this month.

The European Union recognised Juan Guaido as president of Venezuela in January 2019, following calls from Washington to declare him as head of state.

While the Trump administration had unsuccessfully sought to put pressure on the international community to replace Maduro, Joe Biden had already said that he would be willing to "negotiate" with Maduro to put an end to the ongoing political and economic crisis , adding that he isn't going to demand the Venezuelan president's resignation as a precondition to ending US sanctions.