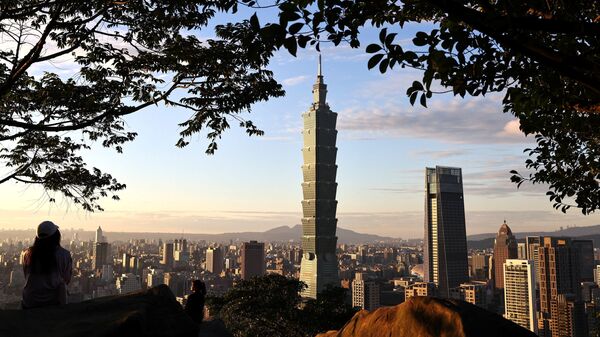 WASHINGTON (Sputnik) - The US State Department says Washington plans to strengthen ties with Taiwan, which China considers to be part of its territory.

According to Price, the US is concerned over what it considers China’s continued pressure against Taiwan.

"The United States notes with concern the pattern of ongoing PRC attempts to intimidate its neighbors, including Taiwan. We urge Beijing to cease its military, diplomatic, and economic pressure against Taiwan and instead engage in meaningful dialogue with Taiwan’s democratically elected representatives," State Department Spokesperson Ned Price said said in a statement on Saturday.

"We will stand with friends and allies to advance our shared prosperity, security, and values in the Indo-Pacific region — and that includes deepening our ties with democratic Taiwan. The United States will continue to support a peaceful resolution of cross-strait issues, consistent with the wishes and best interests of the people on Taiwan. … We will continue to assist Taiwan in maintaining a sufficient self-defense capability," State Department Spokesperson Ned Price said on Saturday.

Taiwanese envoy to the United States Hsiao Bi-khim was present during US President Joe Biden's Wednesday inauguration ceremony, marking Taiwan’s first formal representation in Washington since the US severed diplomatic ties with Taipei over 40 years ago.

Prior to Biden's inauguration, now ex-State Secretary Mike Pompeo announced the lifting of "complex internal restrictions" on regulations of official interactions with Taiwanese authorities that were unilaterally imposed by Washington to "appease" Beijing. The move was condemned by Beijing, as Chinese FM spokesman Zhao Lijian recalled the US had committed to the "One China" policy after the establishment of the Washington-Beijing diplomatic relations and vowed to only keep informal relations with Taiwan in cultural, commercial and other areas.

The US, along with many other countries, does not recognize Taiwan as a sovereign nation, but, nevertheless, has kept informal relations with the island after severing diplomatic ties with it in 1979. China, which views Taiwan as its breakaway province, is uneasy over its cooperation with Washington, especially in defense.