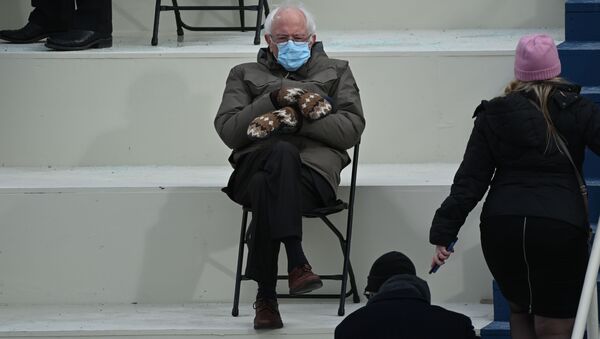 After a photo of the former Democratic primary candidate - now chair of the Senate Budget Committee - took the internet by storm, a jumper available for purchase on the Sanders campaign website featuring the image was sold out within days.

Bernie Sanders has turned viral meme of him wearing mittens at Joe Biden’s inauguration ceremony into an opportunity to raise money for charity.

The photo of the prominent democratic socialist's, showing him wrapped up warm has been made into a new sweatshirt and put up for sale on his campaign website, with all proceeds being given to food-aid program Meals on Wheels.

Named the 'Chairman Sanders Crewneck' in reference to his assumption to the head of the Senate Budget Committee due to Democratic control over the senate, was put on sale on his website for $45. The popularity of the meme has led to the jumper being completely sold out in a matter of days.

“Not only are we having fun but what we’re doing here in Vermont, is we’re going to be selling around the country sweatshirts and T-shirts and all of the money that’s going to be raised, which I expect will be a couple of million dollars, will be going to programs like Meals on Wheels that feed low-income senior citizens", the 79-year-old senator told CNN’s State of the Union on Sunday. “So, it turns out actually it’s a good thing, not only fun", he added.

Sen. Bernie Sanders reacts to his inauguration moment that went viral in the form of a meme: "It turns out actually to be a good thing and not only a fun thing." He's turning the moment into a charitable effort for Meals on Wheels in Vermont. https://t.co/GVWaWXLxP3 #CNNSOTU pic.twitter.com/UfA7sOsczr

​The now-famous mittens were made by a Vermont second-grade teacher out of old sweaters and recycled plastic bottles. Jen Ellis put the hand-made winter garments up on Etsy but soon announced that she had quickly sold out.

“Every time I go into my email, another several hundred people have emailed me. I hate to disappoint people, but the mittens, they’re one of a kind and they’re unique and, sometimes in this world, you just can’t get everything you want".

The photograph of the independent senator from Vermont huddled up warm in knitted mittens, sitting with his legs crossed on a chair, socially distanced from other inauguration attendees has taken over the internet in recent days.

I made Bernie’s mittens as a gift a couple years ago. They are made from repurposed wool sweaters and lined with fleece (made from recycled plastic bottles). #BerniesMittens pic.twitter.com/lTXFJvVy9V

​Netizens took the image and edited it into billions of pictures and videos across social media from taking down Conor McGregor in a UFC fight, to attending the Yalta conference.

@BernieSanders broke the internet with the big gloves and resulting super meme. Some of my favorites in this post: https://t.co/f5ebtOMnsE pic.twitter.com/O5i26RWgxO

​Others have made sculptures and even gotten tattoos of the popular image.

What in the world! Y’all taking this Bernie Sanders Meme too far. Not a tattoo 😂😂 📷 @1inamillkee @copperheadtattooparlor pic.twitter.com/TE3hqh6SOM