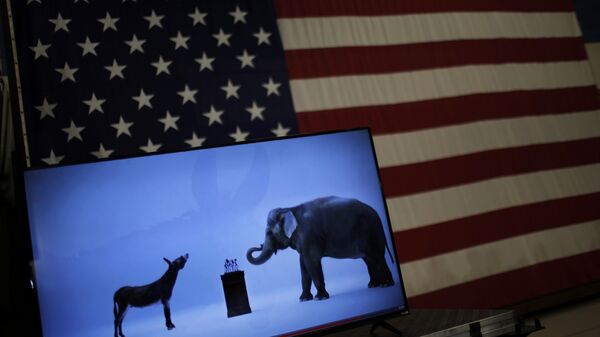 This week, the Wall Street Journal reported that Donald Trump, seething over his alleged betrayal at the hands of high profile Republicans including Mitch McConnell in the wake of the 6 January Capitol riot, was considering forming a new political party called the Patriot Party.

The creation of a new political party in the US would be fraught with numerous risks, and would be unlikely to succeed due to the rigid nature of the American two-party system, says Charles Anthony Smith, a political science and law professor from the University of California, Irvine, and a US leading expert on gerrymandering.

If Trump starts a new party, “it’s going to split the Republican Party and they will have a very hard time winning elections until either his new party goes away or their old party goes away,” he believes.

The problem for Trump, according to the academic, is that “he does not have a roster of policy positions. It’s very hard to build a party just on personality. If you look at the Republican platform this past election, it was one page and it said the Republican platform is whatever Donald Trump says it is, that’s literally what it said. You can’t really build a party if…the person who leads the party goes away.”

At the level of presidential elections, Smith compares Trump to Ross Perot, the Texas billionaire and third party candidate who ran for president in 1992 and 1996, and who won a good chunk of the vote (18.9 percent and 8.4 percent, respectively) but failed to win any electoral votes or state. Unlike Perot, the professor argues, Trump doesn’t have the policy positions which a big enough portion of the public could buy into or which Democrats and Republicans could try to co-opt from him for their own benefit. 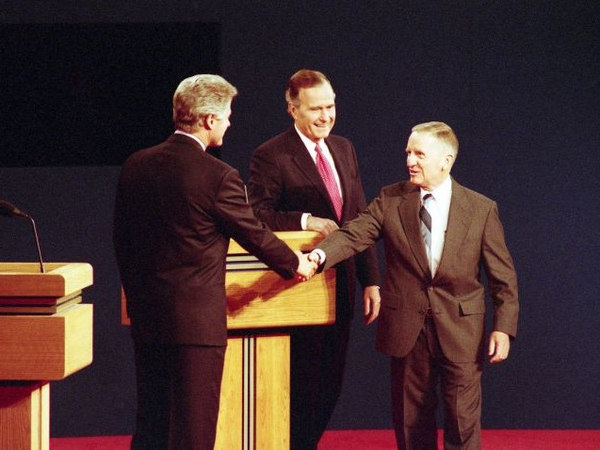 The Winner Takes It All

At the state level, things are further complicated by the binary nature of the US’s "winner take all" election system, which requires a plurality or a majority of the vote for a district to win a seat in the House of Representatives. Smith suggests that this system, that’s baked into the Constitution, “is an overwhelming institutional barrier to get over. You would have to have a really good idea and one party would have to just oppose it to lose.”

“As long as we have ‘winner takes all’ House districts, the two-party system isn’t going anywhere. Because there’s something called Duverger’s Law that the number of viable parties is N+1, where N is the number of available seats in the district. If you have one seat in the district, the only viable number of parties is 2 (N+1) – one plus one. If the district has two or three seats, you would see three or four parties as viable, and it's because if two parties are competing on one side of the spectrum and one party is competing on the other, the one party will capture the middle and win the seat every time. We would have to change a fundamental constitutional structure to be able to get away from a two-party system,” Smith explains.

Furthermore, he says, “one really important detail that a lot of international folks don't realise is – spending bills in the United States have to originate in the House of Representatives. The president can say that he or she wants to spend whatever they want. But the House of Representatives originates all the spending bills; you begin with all functions of government as taxing and spending. They get money and then they do things with it. That's the first thing government does. Because it begins in the House, the House really dictates how policy happens and how politics happens. Because the House has this single member district structure, there really is no way for a third party to ever get any traction in the House because it would be impossible to win a majority of seats in the single member districts, many of which have been gerrymandered. But in general, there isn't really an institutional roadmap for a third party to become a force in the House of Representatives. If you can't do it there you're just irrelevant.” 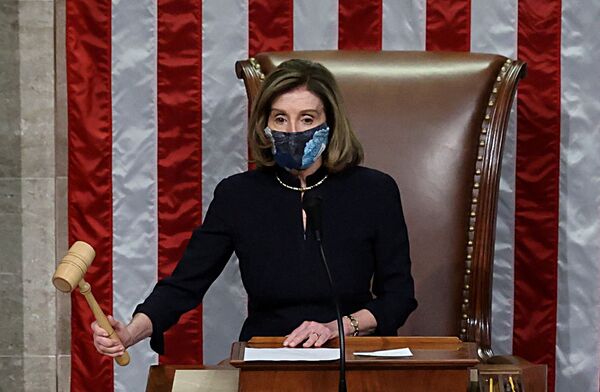 U.S. House Speaker Nancy Pelosi (D-CA) presides over the vote to impeach President Donald Trump for a second time, a week after his supporters stormed the Capitol building, on the floor of the House of Representatives in Washington January 13, 2021.
© REUTERS / Jonathan Ernst

US System Flawed, But Alternatives Have Problems

Smith admits that America's two-party system is “not efficient,” keeping third parties out, reducing representation for smaller groups interested in specific issues like the environment, education, taxes, or business, and forcing voters to split up based on secondary issues and “things the elites in their parties promote.”

“Is it ok if professional athletes kneel during the national anthem? This becomes a partisan issue that the public gets very angry and divided about. But symbolic speech is symbolic. It doesn't really matter at the end of the day whether it happens or not. The interesting thing is, the public doubles down on whatever the elites tell them to be to disagree about. Those become really big issues, even if they are not really big issues in the real world,” the scholar says.

“On the other hand,” he adds, “big picture issues get resolved relatively quickly in a two-party system,” with both parties rushing to the centre based on what the majority might consider in their interest on a specific issue.

At the same time, a multi-party alternative may not be as perfect it may seem at first. “Multi-party systems work really great until they don’t. If you were in Israel now, you would be questioning whether multi-party systems are a really good idea. They’re about to have yet another election, the government keeps being frozen because they keep having these very divided elections and relatively minor parties control whether the majority or the coalition perseveres. If you're in Italy, you might question whether a multi-party system is a great idea. If you're in the United Kingdom and you're opposed to Brexit, you might really wish you didn't have as many parties as you did, because had there been fewer parties, you would not have had a Brexit-favouring prime minister.” 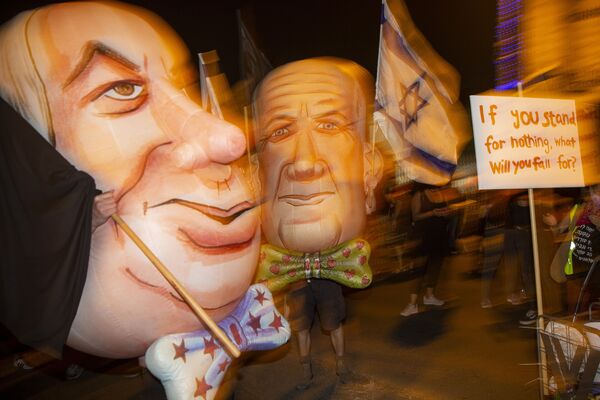 Whether Trump Gets Party Started or Not, GOP Civil War Inevitable

Smith believes that sooner or later, the GOP is going to “go to war to get the Trumpers out of the party or out of any meaningful role in the party.” Otherwise, he says, the party might become unviable and never win another election.

'We’ll Do Something, But Not Just Yet': Trump Speaks for First Time After Leaving DC - Report
“If the Republican Party can’t figure out how to appeal to middle of the road folks, they will become a permanent minority party. Right now, they’re up against Joe Biden, who has been a radical centrist his entire career. He is absolutely in the middle of the road, wherever the policy is at the moment. He’s absolutely a centrist and an incrementalist, and it’s very hard to go against that. That is probably one of the reasons that Trump lost and lost soundly,” the professor says.

Ultimately, Smith thinks Trump might go ahead and run, not because he’s interested in ‘reforming the system’, but because he’s been very successful as a politician.

“He has no interest in reforming the system. He was president. He didn't reform anything. This is the first business in his life that he’s been incredibly successful at. I believe he will start a new party because this has been an incredibly lucrative business, unlike any other thing he's ever tried – Trump Vodka, Trump Steaks, Trump Casino, Trump University – he's got multiple massive failures. Even many of his properties are in peril right now. But [politics] is a business he's done fantastic at as far as generating revenue at a very high return on investment level. I think he will start a new party and he'll call it the Patriot Party or maybe the Trump Party or something like that, for as long as he can continue to generate that revenue,” the academic concludes. 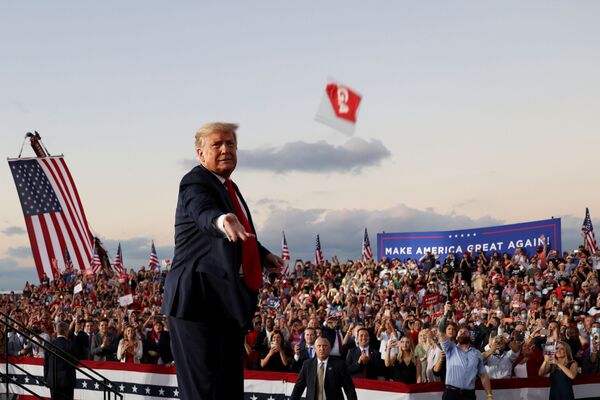 FILE PHOTO: U.S. President Donald Trump throws a face mask from the stage during a campaign rally, his first since being treated for the coronavirus disease (COVID-19), at Orlando Sanford International Airport in Sanford, Florida, U.S., October 12, 2020.
© REUTERS / Jonathan Ernst

Trump has yet to comment on his future plans. On Friday, in his first remarks to the media as a former president, he said "we'll do something, but not just yet," without elaborating.