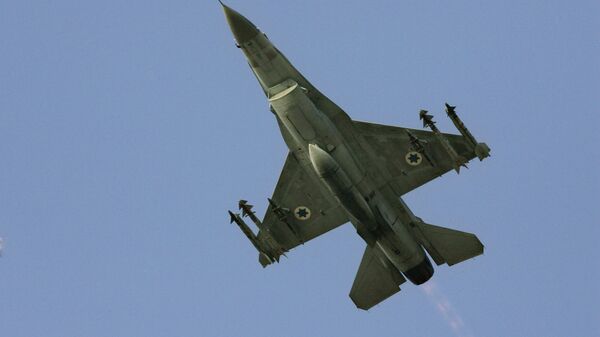 Ilya Tsukanov
All materialsWrite to the author
Four civilians were killed and four others injured in a missile attack in Hama province Friday morning that was allegedly carried out by Israel, with Syrian media reporting that three houses in Hama City were destroyed, and the Syrian military indicating that it managed to intercept most of the incoming projectiles before they struck their targets.

Syria’s Foreign Ministry sent letters to United Nations Secretary-General Antonio Guterres, the Security Council and the UN’s Human Rights Council in the wake of the latest Israeli air attack on the war-torn country.

“Israel committed…a new aggression on the Syrian Arab Republic’s territories in the surrounding of Hama city, which claimed the lives of two parents, two children and injured four members of the same family, in addition to destroying a number of houses,” the letter says, according to SANA.

“While the Syrian Arab Republic calls upon the UN and the Human Rights Council to assume their responsibility and condemn these Israeli aggressions that pose a new threat to the security and stability of the region, it affirms its determination to defend the sanctity and sovereignty of the Syrian territories and to protect its people from those aggressions in all legitimate means guaranteed by the international norms and charters,” the appeal adds.

According to the foreign ministry, Friday’s assault was one of over fifty attacks carried out in the space of less than a year, with other strikes also claiming the lives of civilians and destroying their property. These continued strikes are a “clear violation” of Syrians’ human rights and of international law, and an attack against Syrians’ right to live in peace and security, the ministry stressed.

Damascus also criticized the “silence” of some international actors, particularly those who “speak highly about human rights”, suggesting that this silence has encouraged Tel Aviv to continue its “hostile acts” against Syria on a par with the crimes committed against the country by terrorist groups in recent years.

Israel rarely comments on its operations in Syria, and refrained from doing so again following Friday’s attack on Hama.

Tweet reads: Damage done to civilian homes as a result of the Israeli aggression on Hama today at dawn.

The strike, the first of its kind to take place under newly inaugurated US President Joe Biden, was reportedly launched from the direction of Lebanon, whose airspace the Israeli Air Force regularly uses to help avoid Syria’s air defences.

World
Syria Shouldn't Be Turned Into Battlefield For Israel and Iran, Lavrov Says
Last week, Russian Foreign Minister Sergei Lavrov warned Israel that Syria should not be turned into a battlefield between Tel Aviv and Tehran, and asked the Israeli government to give Moscow any information on any perceived threats instead of using the military option. “Our dear Israeli colleagues, if you have facts that your state is facing threats from Syrian territory, report the facts urgently and we will take every measure to neutralize the threat,” Lavrov stressed.

In the rare instances that they have commented on military operations in Syria, Israeli authorities have claimed that their campaign is aimed at dislodging alleged ‘Iran-backed’ forces and militias operating in the country. Damascus has dismissed this argument, stressing that it is its sovereign right to host whatever forces it deems are needed to assist the country in the battle against terrorism, and pointing out that Iran’s presence in Syria is limited to military advisors. Hezbollah, a Lebanese political movement and militant group, has also assisted Damascus in its decade-long war against a host of takfiri terrorists ranging from Daesh (ISIS)* to al-Qaeda.* Israel and the US designate Hezbollah itself as a 'terrorist' group.