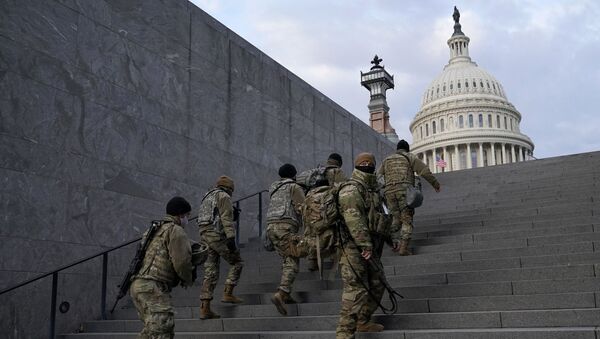 Gaby Arancibia
All materialsWrite to the author
Ahead of Inauguration Day, thousands of National Guard troops were deployed to Washington, DC, in light of the deadly January 6 Capitol riot and threats that Trump loyalists were planning to stage nationwide armed protests at government buildings, including at the US Capitol.

Close to 200 National Guards troops who were ordered to the nation’s capital to provide additional security at inaugural festivities have reportedly returned positive COVID-19 tests, prompting fears that additional members are likely to become infected due to cramped working quarters.

Citing defense officials with knowledge of the development, the Wall Street Journal reported Friday that troops had been screened for COVID-19 prior to their deployment; however, unless it was required under their unit’s screening process, not all individuals were tested for SARS-CoV-2, the deadly virus that causes COVID-19.

The potential super spreader incident was compounded when deployed guard members were instructed to work and take breaks in tight quarters - the complete opposite of social distancing guidelines imposed by government agencies.

Politico reported that the situation worsened even more on Thursday, when troops were told to vacate the Capitol grounds and relocate to a nearby parking garage. The outlet noted that one 5,000-strong National Guard unit was directed to a garage that was fitted with only one bathroom.

Photos from the parking garage show dozens of troops huddling in corners and opting out of wearing masks, another preventative measure health professionals have urged individuals to adhere to in order to curb the spread of the virus.

Reports of troops being told to vacate the congressional building quickly drew outrage from lawmakers, who have since called for an investigation into the development. At present, a probe has been undertaken by the Senate Rules Committee.

“Ideally, these guys should all be in hotels. When they’re taking rest time, they should be taking it outside the campus with an ability to be separated and socially distanced,” Sen. Chris Murphy (D-CT) told Politico, noting that officials needed to determine “what went wrong” that prompted troops to move into the parking garage.

Earlier reports had suggested the relocation order was given by the Capitol Police, however, acting Capitol Police Chief Yogananda Pittman issued a statement Friday denying the force played a role in the incident.

More than 25,000 National Guard members from all 50 states were directed to Washington, DC, amid heightened security concerns following the Capitol insurrection. With some members diagnosed with asymptomatic cases, officials have grown concerned that the deployment could prompt a spreader event as troops return to their home base and as members stay on indefinitely.