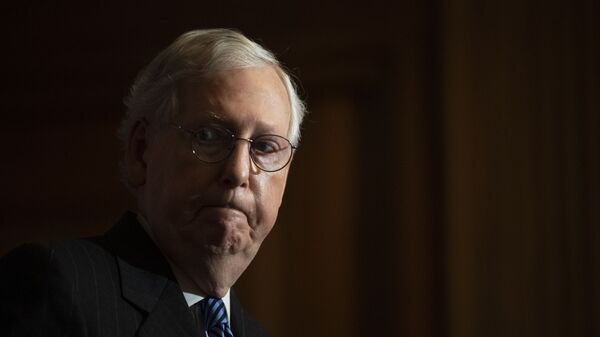 Svetlana Ekimenko
All materialsWrite to the author
On his first full day in office, US President Joe Biden acted upon his campaign promises to reverse a spate of policies implemented by his predecessor Donald Trump, signing executive orders to tear up the the Keystone XL oil pipeline permit, rejoining the World Health Organisation and bringing the US back to the fold of the Paris Climate Accord.

Kentucky Republican Mitch McConnell, who ceded the role of Senate Majority Leader after six years on 20 January after three new Democratic senators were sworn in, has pushed back against Joe Biden’s first executive moves, slamming them as showing the Democrat president to be already headed in "the wrong direction".

McConnell spoke in the Senate on Thursday after the nation's 46th president had urged unity and vowed ‘healing’ as he took the oath of office on Wednesday. 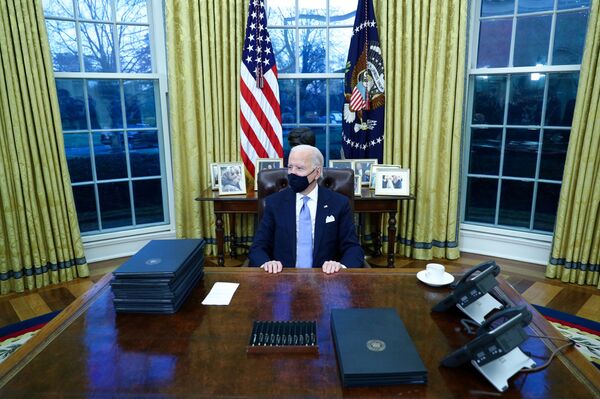 U.S. President Joe Biden signs executive orders in the Oval Office of the White House in Washington, after his inauguration as the 46th President of the United States, U.S., January 20, 2021.
© REUTERS / TOM BRENNER

The solemn address to the nation on inauguration day was followed by a first full day in office that witnessed Biden engage in a flurry of executive action.

"On the Biden administration's very first day, it took several big steps in the wrong direction," said McConnell.
McConnell, who has been in the Senate since 1985 and is now the Senate Minority Leader, suggested that there was still time for Joe Biden to "remember that he does not owe his election to the far left".

As Biden signed 17 executive orders or actions on Wednesday, six of them dealt with immigration and immediately came under fire.

The Democrat ordered moves to preserve the Deferred Action for Childhood Arrivals programme, known as DACA, that has protected hundreds of those who arrived in the US as children from deportation since it was introduced in 2012.

Biden revoked one of Trump's first executive orders, which declared that all people in the country illegally were considered ‘priorities for deportation’. The Department of Homeland Security is putting the brakes on deportations for 100 days, the department announced late Wednesday, "to ensure we have a fair and effective immigration enforcement system focused on protecting national security, border security, and public safety," according to a DHS news release.

Also unveiled was an immigration bill that would give legal status and a hope of citizenship to undocumented residents, and clear the immigration backlog for those seeking to join family members in the US, writes The Hill.

“The new administration has also sketched out a proposal for blanket amnesty that would gut enforcement for American laws while creating huge new incentives for people to rush here illegally at the same time. This kind of failed approach will invite another humanitarian crisis on our border,” said McConnell.

Biden also ended emergency funding towards building a wall along the border with Mexico - one of the signature projects of the Trump administration. 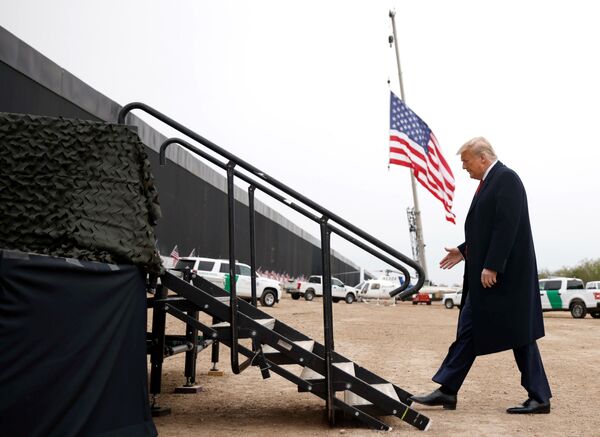 U.S. President Donald Trump walks to the stage to speak during a visit at the U.S.-Mexico border wall, in Alamo, Texas, U.S., January 12, 2021
© REUTERS / CARLOS BARRIA

Another decision taken swiftly by the Biden administration was to reverse the previous US President’s decision to pull out of the Paris Climate Accord.

Trump had formally withdrawn from the deal in 2020 after announcing his intention in the Rose Garden on 1 June 2017. Donald Trump had argued that the 2015 deal was bad for the US and implicitly unfair to it, while giving a ‘free pass’ to countries like India and China, whom he called the world's "biggest polluters".

The 2015 Paris Climate Accord is an international effort aimed at curbing global warming by lowering greenhouse gas emissions and reversing human impact on climate change. Its 196 signatory countries already having pledged to limit global warming below 2 degree Celsius.

And a proposal to gut immigration enforcement and give blanket amnesty?

Rough "day one" for American workers.

​GOP officials claim the agreement will impact US manufacturing jobs and force the nation to meet an ‘unfair’ environmental standard.

US President Joe Biden has cancelled permits for the controversial Keystone XL pipeline.

The pipeline, projected to carry oil nearly 1,200 miles (1,900 km) from the Canadian province of Alberta to Nebraska, to join an existing pipeline, has been under fire from environmentalists and Native American groups for more than a decade, with the latter incensed that it crosses tribal territory. 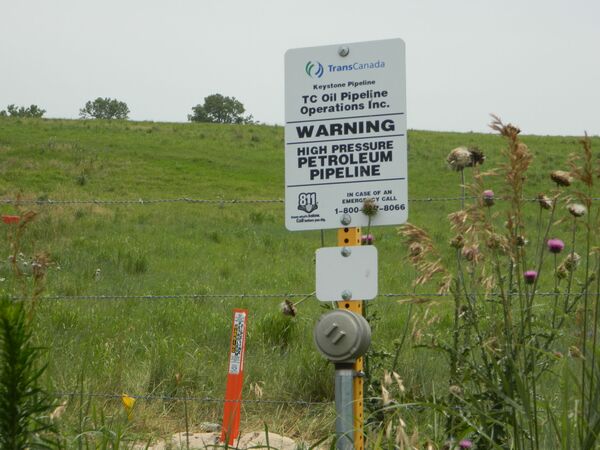 A sign in Steele City, Nebraska where the Keystone XL pipeline would terminate
© Sputnik / Chris Summers

While originally blocked by the Obama administration in 2015, development was allowed to proceed by President Trump, who hailed it as creating 28,000 construction jobs.

Canadian Prime Minister Justin Trudeau had also supported the pipeline and said "we are disappointed but acknowledge the president's decision" to cancel the permit to build it.

Beyond the cited risks of spillage, the pipeline signifies a commitment to develop Alberta's oil sands – something that critics argue will mean the trend toward warming of the atmosphere won't be curbed.

​Conservatives are concerned the move to kill the project will negatively impact both the oil and gas industry as well as employment.

Mitch McConnell reminded Joe Biden and the Democratic Senate majority that Republicans intend to challenge policies they perceive as fraught with negative impact for their constituents.

"If and when our Democratic friends depart from common sense, when they retreat from common ground, when their proposals would harm the common good – then we’ll use the power the American people have given us to push for what is right," said the minority leader in the Senate, adding:

"The president can and should refocus his administration on creating good-paying American jobs, not sacrificing our people's livelihoods to liberal symbolism," McConnell said.