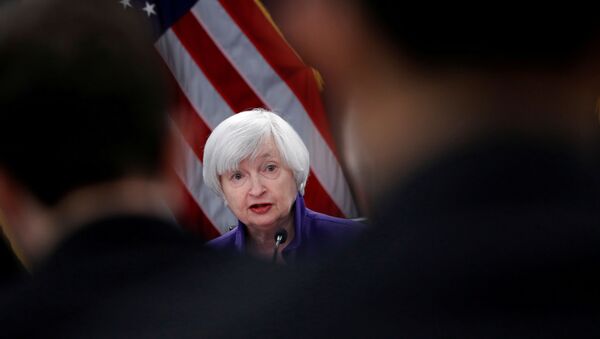 WASHINGTON (Sputnik) - President Joe Biden’s nominee for Treasury Secretary, Janet Yellen, pledged during her conformation hearing to stay tough regarding US sanctions against Russia as part of the United States’ policy to exact a price for Moscow’s alleged territorial aggression in Eastern Ukraine and Crimea.

"If confirmed, I will work closely with the White House and counterparts at other agencies across the administration on US policy toward Russia," Yellen said on Thursday. "I commit to rigorously enforcing sanctions targeting Russian actors for territorial aggression in Eastern Ukraine and Crimea and other threats to US national security."

Under the Trump administration, the United States had imposed sanctions against Russian officials and entities over Ukraine, and President Biden upon assuming office on Wednesday did not signal his administration would change course.

Relations between Washington and Moscow have been strained since 2014 over the Ukrainian crisis and Crimea rejoining Russia. The United States, together with its allies, then began introducing successive rounds of sanctions against Russia.

The European Court of Human Rights ruled earlier that the Ukrainian authorities had deliberately used ill-treatment, excessive force, unlawful detention and abduction of protesters within a campaign to disrupt initially peaceful protests.