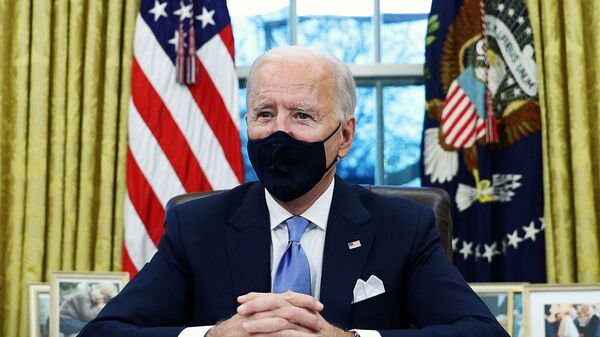 Oleg Burunov
All materialsWrite to the author
On Wednesday, 17 House Republican freshmen wrote to President Biden about their readiness to work together on policy, in a letter that came as many GOP members are still split over recognising the Democrat's election victory.

Congressional Republicans continue to remain at loggerheads over President Joe Biden's calls for unity during his inaugural address on Wednesday, in which he specifically urged everyone to "stop the shouting and lower the temperature".

Senate Minority Leader Mitch McConnell tweeted his congratulations to Biden and Vice President Kamala Harris, adding that he looks forward to "working together everywhere we can and differing respectfully when we must".

I urge the president to follow through on this commitment by working with members of Congress from both sides of the aisle to pursue policies that will lead to peace and prosperity for all Americans. I am praying for President Biden and his success in leading our country forward.

Republican Senator Pat Toomey praised the US president "for his call for national unity, and his assurance to those who did not support him that he will nevertheless be president for all Americans".

"I urge the president to follow through on this commitment by working with members of Congress from both sides of the aisle to pursue policies that will lead to peace and prosperity for all Americans", Toomey stressed in a tweet.

He was echoed by fellow senator Lisa Murkowski who stated that Biden's address to the nation was :filled with hope for a more unified nation and a commitment to work for all Americans". 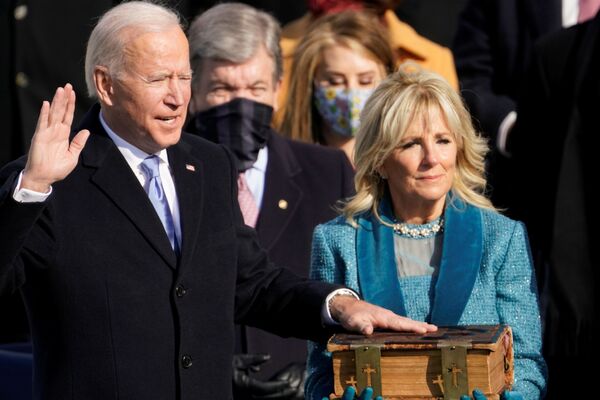 Joe Biden is sworn in as the 46th president of the United States by Chief Justice John Roberts as Jill Biden holds the Bible during the 59th Presidential Inauguration at the U.S. Capitol in Washington, U.S., January 20, 2021.
© REUTERS / Andrew Harnik/Pool

Murkowski called for more effort "to put the divisiveness and turmoil of the last few months behind us, and move forward with respect, optimism, and hope".

Senator Mitt Romney, for his part, described Biden's speech as "very strong and very much needed", adding, "We as a nation come together if we are told the truth. And if we have leaders who stand for enduring American principles".

The statement followed 17 House Republican freshmen sending a congratulatory letter to Biden, in which they also expressed their willingness to work with Biden on policy-related issues.

"After two impeachments [of former US President Donald Trump], lengthy inter-branch investigations, and most recently, the horrific attack on our nation's capital, it is clear that the partisan divide between Democrats and Republicans does not serve a single American", reads.

The document apparently refers to the violent events of 6 January, when Trump supporters breached the US Capitol building in Washington, DC in a bid to disrupt congressional certification of the 3 November presidential election results.

Some Republicans Downbeat About Biden's Speech

Other Republicans, meanwhile, were not that optimistic about Biden's address, with former New Jersey Governor Chris Christie, telling ABC News that "the rhetoric was very forward looking […] but every executive action he took was about reversing what had happened before".

Senator John Barrasso, in turn, told reporters that although it was important to unite the country, he was concerned by "some of the executive orders that are coming, specifically in regard to the Keystone XL pipeline".

On Wednesday, Biden announced that he was revoking a key permit for the proposed pipeline, projected to carry oil nearly 1,200 miles (1,900 km) from the Canadian province of Alberta down to Nebraska.

Senator Steve Daines from Montana was cautiously optimistic about Biden's speech, saying in a statement that he was eager to work with the Biden administration "when we can find common ground for the good of Montanans".

"But I will also vigorously work against their agenda when I think it will harm our great state", Daines underscored.

In his inaugural speech on Wednesday, Biden proclaimed a "historic moment of crisis and challenge", calling to meet "this moment as the United States of America".

"If we do that, I guarantee you we will not fail", he said. "The answer is not to turn inward, to retreat into competing factions. We must end this uncivil war that pits red against blue, rural versus urban, conservative versus liberal. We can do this if we open our souls instead of hardening our hearts. If we show a little tolerance and humility", Biden stressed.

Former US President Donald Trump had repeatedly refused concede his loss to Biden, slamming what he described as the "most corrupt elections" in US history.

Biden to Revoke Trump Orders on Immigration, Border Wall, WHO Walkout, Climate Change on First Day
The ex-president and former first lady refused to attend the 20 January inauguration ceremony, instead departing for Florida early Wednesday morning. Trump's early departure marked the first time since 1869 that a president refused to attend their successor's swearing in.

Also on Wednesday, reports surfaced that Trump had left Biden a letter in the Oval Office, in line with a longstanding tradition carried out by outgoing presidents.

"The president wrote a very generous letter. Because it was private, I won't talk about it until I talk to him. But it was generous", Biden told reporters.