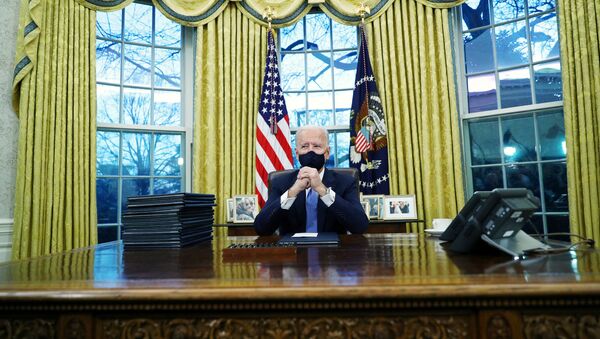 Mary F.
All materialsWrite to the author

Asya Geydarova
Editor
All materialsWrite to the author
The inauguration of President-elect Joe Biden took place on January 20 and marks the start of the four-year term of Biden as the 46th president of the United States and Kamala Harris as vice president.

Biden has already signed a series of executive orders to undo US President Donald Trump's legacy during his first day in office, signing several executive orders regarding immigration, climate change, racial equity and the handling of the COVID-19 pandemic.

"I'm proud of today's executive actions," Biden said on Wednesday evening. "I'm going to start by keeping the promises I made to the American people."

​Specifically, Biden has already signed executive orders to end funding for the border wall, to reverse the Muslim travel ban, to reenter the World Health Organization (WHO), to rejoin the Paris Climate Agreement and repeal the approval of the Keystone XL oil pipeline, AP reported.

"There's no time to start like today," Biden told reporters in the Oval Office, CNN reported. "I'm going to start by keeping the promises I made to the American people."

On Wednesday, Biden signed executive orders to halt the construction of the wall on the US-Mexico border and to terminate the so-called "Muslim travel ban" imposed by the Trump administration.

Trump had declared a national emergency on the southern border to divert funds for the construction of a border wall. On January 2017, the Trump administration first introduced a ban prohibiting entry of foreign nationals from seven Muslim majority countries, although court challenges forced the administration to modify the ban multiple times. 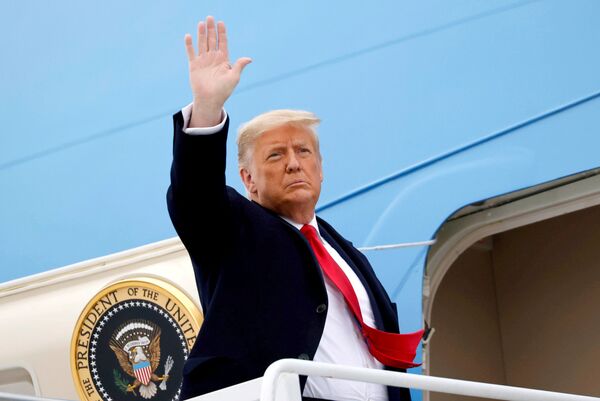 Back to the Paris Accord

"Third I'm gonna send while you're all here is the commitment I made that we're going to rejoin the Paris Climate Accord as of today," Biden said. A similar tweet was later posted on the POTUS' official account on Twitter.

We're back in the Paris Climate Agreement.

UN Secretary-General António Guterres has also welcomed Biden's decision to rejoin the Paris accord and expressed commitment to working with Biden to overcoming climate emergency and helping countries recover from the pandemic.

"I warmly welcome President Biden’s steps to re-enter the Paris Agreement on Climate Change and join the growing coalition of governments, cities, states, businesses and people taking ambitious action to confront the climate crisis," Guterres said. "I am committed to working closely with President Biden and other leaders to overcome the climate emergency, and recover better from COVID19."

The new administration also made a decision to re-engage with the WHO, after Trump announced in May that Washington was formally terminating its relationship with the organization and redirecting funding to other public heath initiatives. The former US president then claimed that the body helped China conceal information about the origins of COVID-19.

Guterres also welcomed Biden’s decision to rejoin the WHO.

“We’ll press forward with speed and urgency, for we have much to do in this winter of peril and significant possibilities — much to repair, much to restore, much to heal, much to build and much to gain,” Biden said during his inaugural address.

Back in September, WHO said its January 30 emergency declaration gave the United States sufficient time to prepare for the pandemic while Beijing has said it has been transparent about the details of the virus's origins.

Overall, Biden signed 17 executive orders to undo some of the Trump administration's policies, including to halt the Keystone XL pipeline and to revoke oil and gas development on federal wildlife lands, and an executive order mandating the US public to wear a face mask and practice social distancing on federal property.

"While we welcome the President's commitment to fight climate change, we are disappointed but acknowledge the President’s decision to fulfill his election campaign promise on Keystone XL", Canadian Prime Minister Justin Trudeau said in a statement.

The decision to block the controversial pipeline will come despite last-minute lobbying by Trudeau. Canada has the third-largest oil reserves in the world and the Canadian Prime Minister wants the pipeline to appease the oil industry and to avoid the alternative, which is to transport oil thousands of miles across Canada by train from the Athabasca tar sands in Alberta to the east coast.

In a statement Wednesday, White House press secretary in the Biden administration Jen Psaki revealed that more executive orders are in the pipeline.

"In the coming days and weeks we will be announcing additional executive actions that confront these challenges and deliver on the President-elect's promises to the American people, including revoking the ban on military service by transgender Americans, and reversing the Mexico City policy," Psaki said in a statement, CBS News reported.

According to a report by the Hill, is expected to take action on 53 executive items over the next 10 days.

Biden was sworn in as the 46th president of the United States, preceded by Kamala Harris taking office as the first-ever female vice president. During his inauguration address, Biden vowed to become a leader for all and re-engage with the world in the most guarded and one of the least attended inauguration ceremonies in the country’s history.

Trump and his spouse, Melania Trump, left the White House early on Wednesday for the last time during his four-year term in office, just hours ahead of Biden's inauguration. The couple broke with long-standing US tradition by skipping Biden's inauguration, and instead attending a farewell ceremony later this morning at Joint Base Andrews in Maryland before departing to Florida. 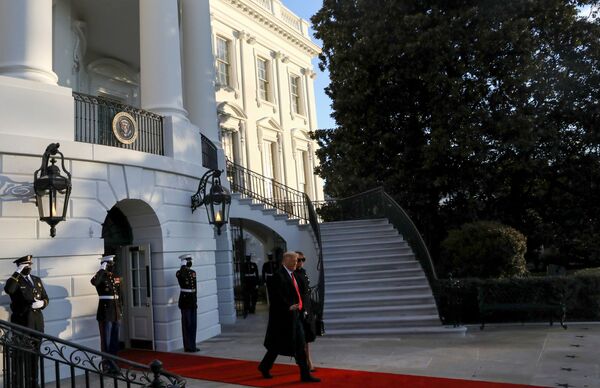 U.S. President Donald Trump and first lady Melania Trump depart the White House ahead of the inauguration of Joe Biden as the 46th President of the United States, in Washington, U.S., January 20, 2021.
© REUTERS / LEAH MILLIS

In accordance with another tradition, though, Trump left a handwritten letter to his successor. Biden described the letter as a "very generous" one, but chose not to disclose the details, citing privacy concerns.