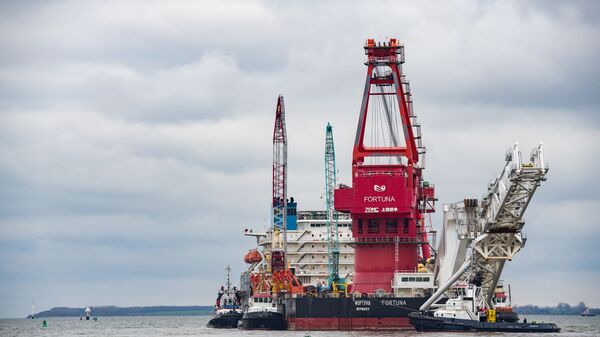 Asya Geydarova
Editor
All materialsWrite to the author
Washington has opposed the project to lay a 745-mile-long twin pipeline that will carry up to 2 trillion cubic feet of gas per year from Russia to Germany, seeking to export more liquefied natural gas to Europe.

The Department of Treasury on Tuesday imposed sanctions on the Russian pipe-laying vessel Fortuna and its owner KVT-Rus for building the Nord Stream 2 gas-exporting route.

"The United States went beyond decency in an attempt to achieve its opportunistic goals. They violate the norms of international law, the principles of fair and free trade," Antonov said on Tuesday.

According to the diplomat, the new sanctions are "nothing more than blatant unfair competition" in an attempt to create an advantage in the European energy market.

"All this is nothing more than blatant unfair competition. The desire to create an advantage for itself in the energy market of Europe, to force the countries of the region to buy American raw materials."

Meanwhile, President-elect Joe Biden’s nominee for Secretary of State, Antony Blinken, said during his Senate confirmation hearing that he will try to convince allies to stop the project.

In the face of the sanctions, Bilfinger has become the first German company to quit the Nord Stream 2 project, the Bild newspaper reported. The company reportedly submitted two letters to the respective US agency in December and January, saying that the company would resile from all contracts with Nord Stream 2 AG, the gas pipeline's operator.

The pipeline's construction was suspended a year ago after sanctions forced Swiss pipelay company Allseas to withdraw from the project. It was resumed in December 2020 and is expected to take several months, according to expert estimates.