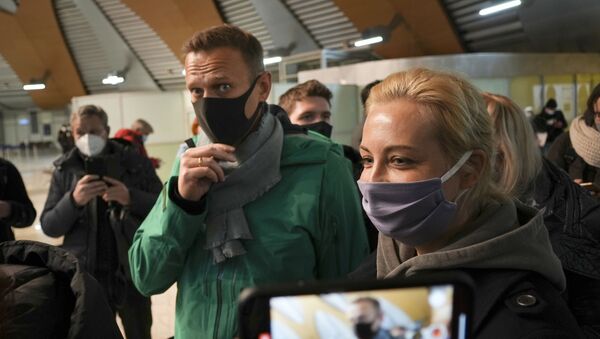 WASHINGTON (Sputnik) - The US State Department is calling for the immediate release of Russian political opposition vlogger Alexey Navalny who was detained at a Moscow airport upon his arrival into the country from Germany.

On Sunday, Navalny landed at Moscow's Sheremetyevo International Airport, where he was detained. Prior to Navalny's return to Russia, the Russian Federal Penitentiary Service warned that it would arrest him for probation violations, after he was previously found guilty by the court of committing two administrative offenses.

"We urge the Russian government to provide a level playing field for all political parties and candidates seeking to compete in the electoral process. Aleksey Navalny is not the problem. We demand his immediate and unconditional release," US Secretary of State Mike Pompeo said in a statement.

The outgoing US top diplomat added that the "Russian people, like people everywhere, deserve a government that supports an open marketplace of ideas, transparent and accountable governance, an independent judiciary, and the ability to exercise their basic human rights of speech and assembly without fear of retribution."

Deeply troubled by Russia's decision to arrest Aleksey Navalny. Confident political leaders do not fear competing voices, nor see the need to commit violence against or wrongfully detain, political opponents.