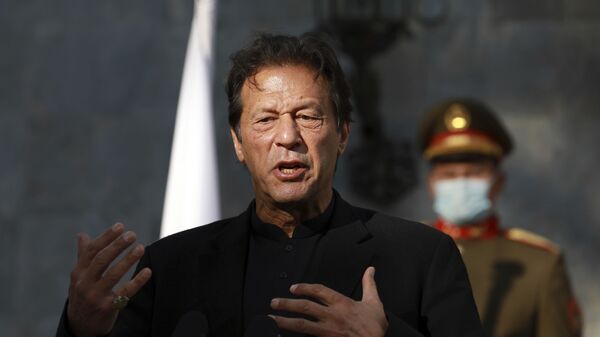 Dhairya Maheshwari
All materials
Pakistani Prime Minister Imran Khan says that leaked chats of a prominent Indian anchor were proof of his Indian counterpart Narendra Modi using the Balakot air strikes for “political gains”. The Indian air raids came in response to a terror attack on a paramilitary convoy on 14 February 2019, just months ahead of the federal election.

“Indian sponsorship of terrorism in Pakistan, its abuses in IOJK (Indian side of Jammu and Kashmir Union Territory) and a 15-year Indian global disinformation campaign against us all stand exposed. Now India's own media has revealed the dirty nexus that is pushing our nuclearised region to the brink of a conflict it cannot afford”, Khan said in a series of tweets.

In 2019, I spoke at UNGA on how India’s fascist Modi govt used the Balakot crisis for domestic electoral gains. Latest revelations from communication of an Indian journalist, known for his warmongering, reveal the unholy nexus between the Modi govt & Indian media

​PM Khan’s scathing reaction follows a similar one from the country’s Ministry of Foreign Affairs (MoFA), which also flagged the “unholy nexus” between India’s ruling Bharatiya Janata Party (BJP) and the media for domestic political gains.

​“The transcripts also illustrate the unholy nexus between the Hindutva regime and its cronies in the Indian media. Such actions by the reckless regime driven by considerations of domestic politics are gravely imperiling regional peace and security”, stated Islamabad.

The leaked chats have created a huge controversy in India, with the main opposition party, Congress, saying that someone very senior in PM Modi’s government was leaking information to the Indian journalist. Congress has demanded an inquiry by a high-level parliamentary panel about the leak.

Arnab's chats dated 23.02.2019 refer to sharing of Intel re: action along the Pak border. It means someone very senior in Govt is leaking highly confidential info which may endanger the lives of our soldiers & so that mercenary considerations can add to TRPs.

​Meanwhile, the Goswami-led Republic TV released a statement on Sunday evening, in which it said that Islamabad’s criticism of New Delhi on the matter was “proof of deep-conspiracy of anti-India and anti-national forces”.

“The Republic TV network had also produced proof of the Balakot strike on 6 March, 2019, which had deeply embarrassed the Pakistan state machinery and its intelligence apparatus”, read the statement.

​Pakistan’s reaction comes in the wake of the leaking of WhatsApp chats of prominent Indian anchor Arnab Goswami, in which he indicated that he knew about India’s top-secret mission to strike purported terror camps in Pakistan’s Khyber Pakhtunkhwa province in cross-border raids on 26 February 2019.

Goswami, who heads the Mumbai-headquartered Republic TV, claimed in his conversations on 23 February 2019 that “something big” would happen, three days before the Indian Air Force’s (IAF) Mirage 2000 jets pounded camps allegedly run by proscribed outfit Jaish-e-Mohammad (JeM). While the Indian side claimed that the strike killed around 300 terrorists, Pakistan denied any such camps exist in the area and lodged a complaint against Delhi, accusing it of “eco-terrorism” over air strikes that damaged pine trees.

​The leaked chats are part of a supplementary chargesheet filed by the police in Mumbai against Goswami and Partho Dasgupta, the former head of the television ratings agency the Broadcast Audience Research Council (BARC).

Mumbai Police claim that Goswami and Dasgupta colluded to manipulate the television viewership data to give Republic TV an edge over its rival television networks.