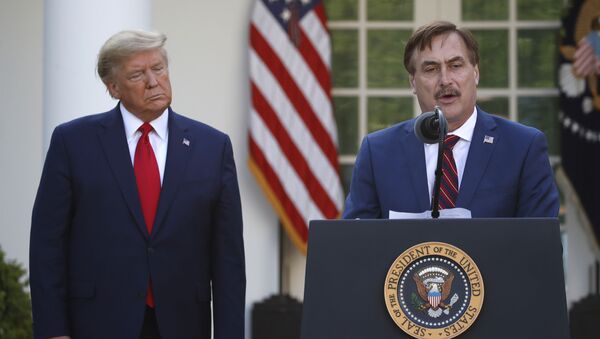 © REUTERS / Alex Brandon
Subscribe
International
India
Africa
Daria Bedenko
All materialsWrite to the author
Earlier, a Trump informal advisor and head of a bedding fabric products firm, Mike Lindell, was spotted near the White House with a handful of paper notes that appeared to read "martial law" and "foreign interference". Lindell claimed he presented "evidence" of election fraud to Trump during their five-minute meeting.

Notes on ‘Martial Law’, ‘Election Fraud’ by My Pillow CEO Caught on Camera as He Visits WH
The outgoing US president has been pushing his "election fraud" claims since after the 3 November election, calling Biden "a fake president" and refusing to accept the outcome of the popular and Electoral College vote.