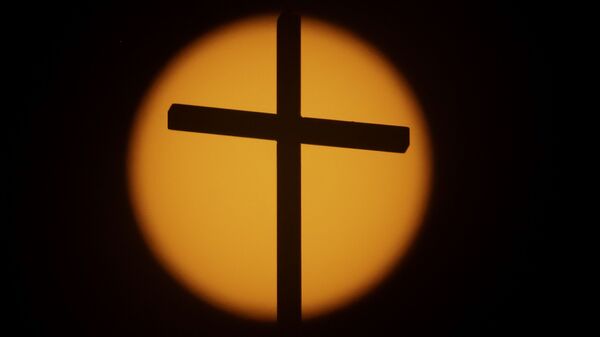 Max Gorbachev
All materialsWrite to the author
Despite the World Health Organisation releasing a statement saying the infectious disease is of animal origin, wild conspiracy theories continue to circulate online. The most popular ones claim the outbreak of COVID-19 was designed to control the world's population.

A Mexican cardinal, who was part of the papal conclave that elected Pope Francis, has attacked Microsoft co-founder Bill Gates, claiming he is involved in a sinister plot. In a video posted on Facebook, Cardinal Juan Sandoval Iñiguez claimed a laboratory in the United States linked to Gates has a new strain of COVID-19.

The clergyman also claimed the vaccines against coronavirus contain satanic microchips and that the pandemic may last up to six years.

"This pandemic won't end in a month or two months, perhaps not this year, perhaps not in three, four, five, six years. That's what these men want", he said.

The video titled "plot of a new world order" has been shared by the newspaper of the Guadalajara archdiocese. It was later censored by Facebook.

According to the National Catholic Reporter, this is not the first time the cardinal has touched upon the issue of the coronavirus pandemic. The clergyman previously questioned the safety measures introduced to curb the spread of the disease. In particular, he spoke against the closure of businesses and cancellation of religious services. He also downplayed the severity of the disease, which has so far killed over 2 million people worldwide, and spread erroneous medical advice.

What Does Bill Gates Have to do With 'Satanic Microchips'?

The Microsoft co-founder has unexpectedly become a scapegoat amid the coronavirus pandemic. Numerous conspiracy theories claim the outbreak was masterminded by him in order to control the world's population. Some social media users allege the vaccines against SARS-CoV-2 contain microchips that will enable Gates to track everyone's movements and gain control of the entire population.

Supporters of these conspiracies draw attention to Gates being at the forefront of the vaccination campaign. The Bill & Melinda Gates Foundation has has so far donated $250 million to laboratories across the world to study COVID-19 and develop vaccines against the infectious disease. It sent $1.6 billion to Gavi, an organisation that supplies poor countries with different inoculations.

Gates himself has dismissed the conspiracy theories against him, branding them stupid. The software developer said he believes such stories hamper the world's recovery from the pandemic.

"It's strange [people believing in conspiracy theories]. They take the fact that I'm involved with vaccines and they just reverse it, so instead of giving money to save lives, I'm making money to get rid of lives. If that stops people from taking a vaccine or looking at the latest data about wearing a mask, then it's a big problem", Gates said.

Incidentally, not only people on the internet believe that COVID-19 is man-made. US President Donald Trump and Secretary of State Mike Pompeo claimed that the virus originated in a Chinese lab in Wuhan, the city where the first case of COVID-19 was reported.

Beijing has dismissed the claim, while the World Health Organisation said there is no evidence the virus is man-made.