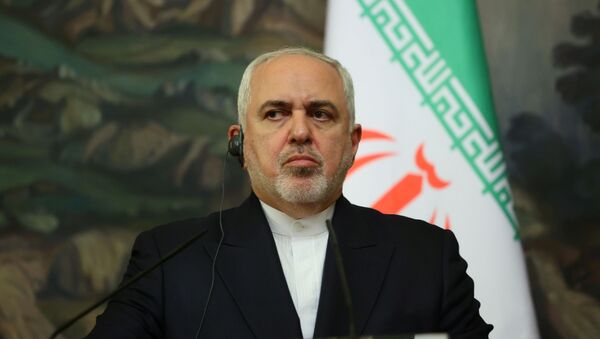 Daria Bedenko
All materialsWrite to the author
Earlier in the day, the United States Central Command (CENTCOM) announced that B-52 bomber aircraft had conducted a second "presence patrol" in the Middle East, calling it a "key part of CENTCOM’s defensive posture".

Iranian Foreign Minister Javad Zarif took to Twitter on Sunday, addressing the official account of the outgoing US president with a denouncement of the B-52 bomber aircraft patrolling the Middle East.

"If your B-52H “Presence Patrols” are meant to intimidate or warn Iran", Zarif addressed Trump, "you should have spent those $billions on your taxpayers' health. [...] While we have not started a war in over 200 years, we don’t shy from crushing aggressors. Just ask your BFFs who supported Saddam", he added, apparently referring to Iraq's allies in the 1980-1988 Iran-Iraq war.

​Zarif's remarks followed the earlier US CENTCOM post  about US B-52 bomber aircraft conducting what was described as a "second Middle East presence patrol of 2021 as key part of CENTCOM’s defensive posture".

CENTCOM said that the patrol is the fifth mission of its Bomber Task Force into the Middle East in the past several months.

"Short-term deployments of strategic assets are an important part of our defensive posture in the region," said Gen. Frank McKenzie, head of CENTCOM. "The training opportunity and continued integration with regional partners improves readiness and delivers a clear and consistent message in the operational environment to both friends and potential adversaries, alike."

​Earlier, reports said that two US B-52s were spotted in Israeli airspace heading toward the Persian Gulf.

US military presence in the Middle East

The US military presence in the Middle East region has long prompted concern in Iran, as it has repeatedly demanded that Washington stop "extraterritorial adventurism" and refrain from what Tehran described as "policy of interfering and sowing division among the countries of the region".

In December 2020, Iran denounced the United States for showing off power in the Persian Gulf when the American nuclear-powered submarine USS Georgia, accompanied by other vessels, crossed the Strait of Hormuz.

Iran has repeatedly called for the US, which has multiple military bases in the Middle East, including Bahrain, Qatar, Saudi Arabia, Iraq and the UAE, to withdraw its troops from the region so that "peace" can be achieved.

In particular, Zarif urged the Trump adminsitration to remove US troops from Iraq and Afghanistan - something that the outgoing president at the time pledged to do.

“As a manifestation of external interference, the presence of foreign forces is another source of Afghanistan’s instability. However, as many countries have stressed, their withdrawal must be orderly and responsible and must not lead to a security vacuum in Afghanistan", Zarif said in December 2020.

The Iranian Foreign Minister also suggested plans for strengthening the Middle East, insisting in his speech at the Raisina Dialogue multilateral conference in New Delhi in 2019 that it is important that "all relevant regional countries" participate in the region's security, promoting "regional balance" while rejecting "hegemony by regional or supra-regional powers".

The long term US military presence in the Middle East increased again after the assassination of top Iranian general Qasem Soleimani in January 2020 on a direct order from Trump, with Washington sending additional aircraft and military vessels into the region.

Earlier in January the Pentagon ordered the USS Nimitz, deployed in the Middle East in April 2020, to stay in the region instead of returning home as previously scheduled amid fears of possible Iranian retaliation for the Soleimani extrajudicial murder.

Trump, after ordering the weaponized drone assassination, claimed that Soleimani had been plotting attacks against the US. Tehran quickly denounced the killing as "a terror act", vowing to bring those responsible "to justice".