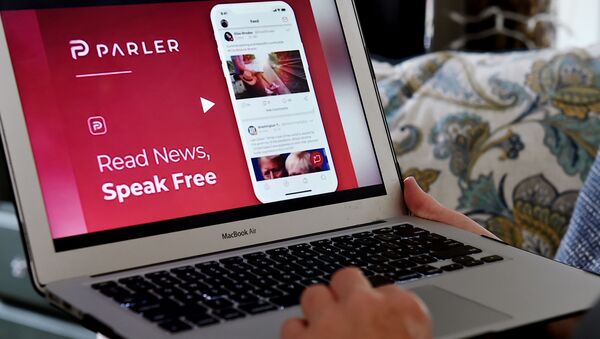 Svetlana Ekimenko
All materialsWrite to the author
The social platform Parler was suspended last week by Amazon, Apple, and Google in the wake of the US Capitol riots on 6 January for ostensibly failing to moderate content inciting hate and violence, prompting the app to file a lawsuit against Amazon Web Services (AWS), accusing the company of violating antitrust laws.

A court filing from the legal team of Parler, a social media app whose user base comprises an extensive number of Donald Trump supporters, has acknowledged that the platform’s CEO John Matze and his family have been forced into hiding over ‘death threats and security breaches’, reports Fox News.

The US microblogging and social networking service had earlier launched an antitrust lawsuit against Amazon after the company ditched it without prior warning from its web hosting service AWS in the wake of the 6 January Capitol riots.

The Jeff Bezos-run tech giant had filed a response to dismiss any “legal basis” to the platform's claims. Amazon also reportedly complained that its employees have been harassed and targeted with death threats.

However, the filing from Parler's lawyers, cited by the outlet, argued that it was John Matze who was on the receiving end of death threats. 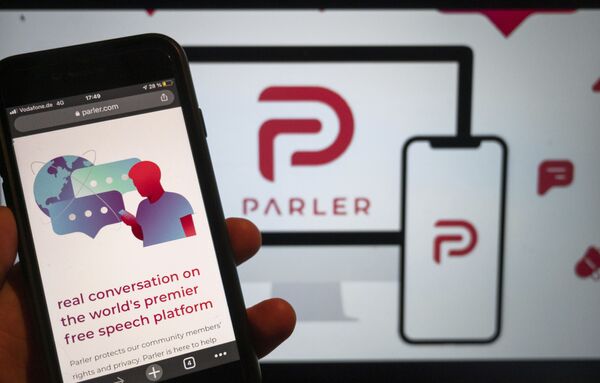 The website of the social media platform Parler is displayed in Berlin, Jan. 10, 2021. The platform's logo is on a screen in the background. The conservative-friendly social network Parler was booted off the internet Monday, Jan. 11, over ties to last week's siege on the U.S. Capitol, but not before hackers made off with an archive of its posts, including any that might have helped organize or document the riot.
© AP Photo / Christophe Gateau

The quoted legal document states that while AWS’s ‘motion to seal’ referred to its own employees, Parler’s staff had been similarly harassed and threatened, and were currently in fear for their personal safety and that of their families, with some forced to flee their home state to ‘escape persecution’.

"Matze himself, as the CEO of the company AWS continues to vilify, has had to leave his home and go into hiding with his family after receiving death threats and invasive personal security breaches," states the filing.

John Matze, a graduate of the University of Denver who founded Parler together with Jared Thomson in 2018, had acknowledged mid-week that since the app went offline on 11 January, he had been targeted with death threats.

"People [are] threatening my life. I can't go home tonight. This is really a lot," Fox News quoted him as saying.

Matze, who teamed up with Thomson to create Parler "after being exhausted with a lack of transparency in big tech, ideological suppression and privacy abuse," according to the app's website, had specifically mentioned a controversial hacker group called UGNazi.

“If we must restrict and censor the voices of people to keep our country safe, then our country is already lost.”
John Matze pic.twitter.com/loJCDVDPvx

​According to him, the cyber group was targeting him by releasing many of his passwords and personal information on the internet.

"They published my street address, they threatened to come through my front door," said Matze.

While the Parler CEO confessed that he had received threats before and never took them particularly seriously, this time he had been compelled to go into hiding with his family and was not sure when he might return.
Matze was quoted as conceding that taking time out might be a good thing for him.

"It’s probably levelled me out. If I was at home right now I think my stress levels would have been like three times higher… at least there is that saving grace."

Parler found itself in the crosshairs after the attacks on the US Capitol that left one policeman and four civilians dead, with reports claiming protesters had used the app to coordinate their actions.

He says other companies with enough server space to host the site have also "shut their doors."

Matze posted abt 20 min ago👇 pic.twitter.com/dcuhyG07HR

​In the wake of the disturbing events in Washington D.C., Amazon, Apple, and Google almost simultaneously suspended the social platform, citing what they purported was its reluctance to moderate hate speech and content that they claimed incited violence.

Parler’s CEO had been shocked over the crackdown by the tech giants, saying, "this is not just our civil liberties, they can shut down a billion-dollar company, half-a-billion dollar company […] overnight".

The suspension of Parler followed a move by Twitter to permanently block Donald Trump's official account for the risk of "further incitements of violence". Earlier Facebook announced it was suspending Trump's account on the platform as well as on Instagram at least for the remainder of his presidential term.

Parler, which iis relatively popular among American conservatives and President Trump's supporters for marketing itself as supporting free speech, immediately found itself in the spotlight as a welcome alternative to mainstream social media. 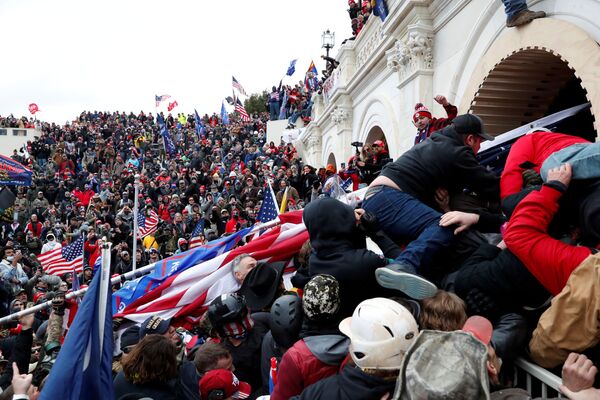 Donald Trump supporters stormed the Capitol building in Washington, DC, on 6 January, as Congress convened to certify the Electoral College votes confirming Democrat Joe Biden as the winner of the 2020 US presidential election.

The sitting president was accused of having inspired the riots by continuing to decry the "massive fraud" manifest in the November election – claims he had repeated at a rally prior to the events at the Capitol.

On 13 January the US House of Representatives voted to impeach Trump for a second time for “incitement to violence". CNN reported on Friday that House Speaker Nancy Pelosi was expected to send the articles of impeachment to the Senate next week.