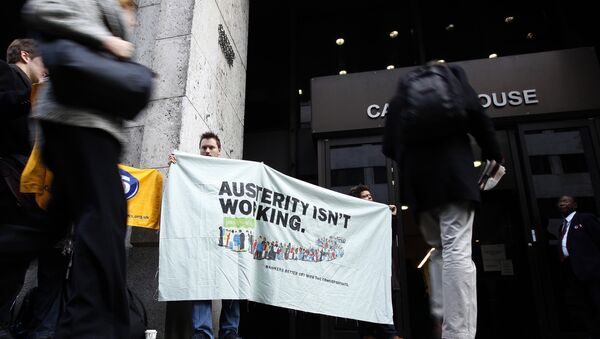 Jason Dunn
All materialsWrite to the author
The United Kingdom is currently in its third national pandemic lockdown amid rising cases of a new fast-spreading coronavirus strain. Westminster previously introduced further funding for benefits claimants but is reportedly set to replace the measure with a one-off cash payment.

Reynolds said that “bringing in a one-off payment that doesn’t even equal half the amount the government is planning to cut from millions of families’ incomes will damage our recovery".

As the UK is facing a recession due to the fallout from the ongoing coronavirus pandemic, the MP warned of further job losses and an encroaching end to the furlough scheme, which has subsidised the wages of those who have been forced out of work.

Adding “a lump sum rather than extended support” will lead to people falling “through the gaps”, he said as unemployment support is currently at a 30-year low.

“Instead of yet another inadequate sticking plaster, the government needs to do the right thing and cancel the cut to Universal Credit. If the chancellor refuses, we urge Conservative MPs to vote with Labour on Monday to give families the security and support they need”, Reynolds said.

The UK has already had the worst recession of any major economy and now we’re in danger of a devastating double dip. That’s the cost of the Conservatives. ⁰
Labour’s priorities would be those of the British people: secure our economy, protect our NHS and rebuild our country. pic.twitter.com/5HtngMsZsb

​This comes as Sunak is allegedly set to introduce a one-off £500 ($679) payment for benefit claimants in place of continuing £20-per-week Universal Credit (UC) raise.

The chancellor met with Work and Pensions Secretary Therese Coffey to explore replacements to the UC payment system on Friday, the Times newspaper reports.

In response to a query about the support payment, Prime Minister Boris Johnson told a parliament committee on Monday that what he wants to see "is jobs, we want people in employment and we want to see the economy bouncing back".

“And I think most people in this country want to see a focus on jobs and growth in wages than on welfare, but clearly we have to keep all of these things under review”, Johnson added.

Citing allies of the chancellor, the Telegraph wrote that Sunak would be "very reluctant” to introduce a UC extension and the Financial Times reported that he would rather provide financial stimulus for job support measures.

The issue will be discussed on Monday when Labour is set to organise opposition day debates and votes in the Commons on the change to benefits payment and on the provision of free school meals.

Future budget plans will be introduced on 3 March, during which the chancellor will attempt to address the UK's nearly £400bn budget deficit.

I’m confident that with the support the Government is providing and, above all, the determination, enterprise and resilience of the British people, we will get through this.

​Experts warned on Friday that the UK is nearing “double-dip” recession, despite official Office for National Statistic (ONS) figures showing a gross domestic product (GDP) decline of an estimated -2.6%. Economists have widely predicted a fall of at least -5.7%.

During the March 2020 beginning of the coronavirus outbreak and the first national pandemic lockdown measures, the chancellor raised UC and the basic working tax credit by £20 a week as part of a series of funding injections intended to mitigate the impact of the crisis. This saw an additional £1,040 added to claimants’ annual incomes.

The UC payment increases are set to end in April, which will see low-income families in the UK have their weekly income cut.

A £500 one-off stimulus check, which would be issued to almost six million claimants, could cost around £3bn to the state purse.

000000
Popular comments
Typical crooked governing-mental policy, give with one hand and take twice as much away with the other.