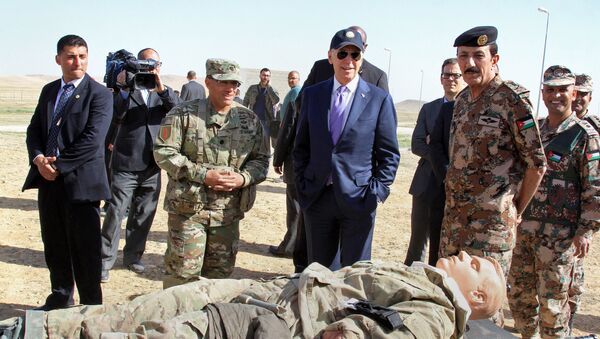 Ilya Tsukanov
All materialsWrite to the author
Jim Jeffrey retired from his post as President Trump’s special representative for Syria and envoy for the Western coalition against Daesh (ISIS)* in November. Shortly before doing so, he frankly admitted to disobeying the president’s orders to reduce the US military contingent in Syria, and to playing “shell games” with the White House.

Jim Jeffrey has penned an article in Foreign Affairs magazine urging President-elect Joe Biden to stay the course on Donald Trump’s Middle East policy, encouraging him to avoid George W. Bush and Barack Obama-style nation-building and “endless wars,” and to focus on “containing” Russia and Iran and “fighting terror” instead.

“Both US Presidents George W. Bush and Barack Obama pursued transformational campaigns in the Middle East based on the erroneous belief that by burrowing politically and militarily into states there, the United States could address the underlying causes of Islamist terror and perpetual regional instability,” Jeffrey wrote in his piece.

“Although Trump’s real policy views were often difficult to divine, his administration took a different tack, with clear results. By keeping American aims limited, responding to imminent regional threats but otherwise working primarily through partners on the ground, Trump avoided the pitfalls encountered by his predecessors while still advancing American interests,” the veteran diplomat added.

According to Jeffrey, these “American interests” have included “avoiding entanglements” in regional conflicts, while “still pushing back on near-peer” competitors Tehran and Moscow, including by supporting “Israeli and Turkish military actions against Iran and Russia in Syria” and relying “on the Gulf states, Jordan, Iraq, and Israel to stand up to Tehran.”

In exchange for its allies doing the grunt work, the former official said, the US under Trump turned a blind eye to their actions, including the alleged Saudi state-backed murder of journalist of Jamal Khashoggi, the provision of support for Israel “when it came to Palestinian issues,” the endorsement of Israeli 'sovereignty' in the Golan Heights and Jerusalem, as well as the easing of long-standing limitations on regional arms transfers. 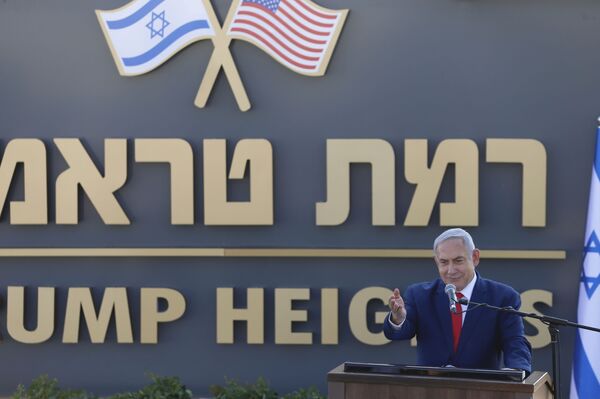 Insisting that Trump’s Iran policy, including the 2018 withdrawal from the nuclear deal and the “maximum pressure” sanctions and intimidation campaign, has been aimed at forcing the country to negotiate and at weakening its influence in the region, rather than regime change, Jeffrey warned that Biden should consider keeping the policy in place if he wants to avoid angering allies.

As for Syria, the former envoy suggested that US goals under Trump included supporting “Turkey and armed opposition elements in Syria…to deny Assad a decisive military victory,” and backing “Israeli strikes on Iranian targets in the country” while trying to isolate Damascus economically and to “crush the country’s economy through sanctions”. Biden, he said, will have to weigh the “advantages” of a “messy war of attrition” against other costs and risks, “including the cost to civilians”. 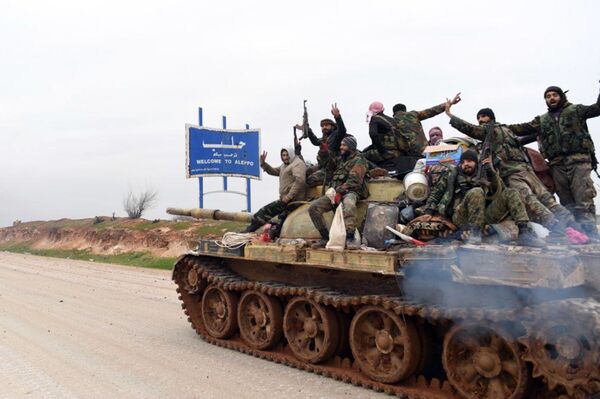 In this photo released Wednesday, Feb. 12, 2020, by the Syrian official news agency SANA, Syrian government soldiers on a tank hold up their rifles and flash victory signs, as they patrol the highway that links the capital Damascus with the northern city of Aleppo, Syria. The M5 highway, recaptured by President Bashar Assad’s forces this week, is arguably the most coveted prize in Syria’s civil war. The strategic highway is vital for Syria’s economy as well as for moving troops.
© AP Photo / SANA

‘What Withdrawal?’ Senior Official Boasts About Openly Lying to Trump to Keep US Troops in Syria
Jeffrey’s Foreign Policy ‘Long Telegram’-style list of recommendations to Biden follows his surprise admission shortly before his resignation in November that he and other members of his staff had deliberately obfuscated the true size of the US military footprint in Syria from the president and repeatedly convinced him to avoid a complete pullout of troops in both 2018 and 2019. The revelation went little noticed by a media focused on the results of the November election, although some pundits described it as an act of subversion that could be punishable by law.

Speaking to the Times of Israel in December, Jeffrey praised the president-elect’s national security team picks, calling them “reassuring.” Among the picks is Antony Blinken, a major beltway insider and proponent of US wars in Iraq, Libya and Syria, whom Biden tapped to serve as his secretary of state.

As Obama’s vice president, Biden was a key proponent of Operation Timber Sycamore, the classified weapons supply and training programme begun in 2012 by the CIA, which saw the US and its allies ship thousands of tonnes of weaponry and billions of dollars in aid to ‘moderate Syrian rebels’ which US media such as the New York Times and the USA Today later revealed included among them or fought alongside al-Qaeda* and Daesh* terrorists against the Syrian government. The programme was closed down by the Trump administration in 2017. Biden’s return to the White House later this month, this time as president, seems to leave open the possibility that the US will return to its policy of providing direct funding and support for terrorist elements in Syria. 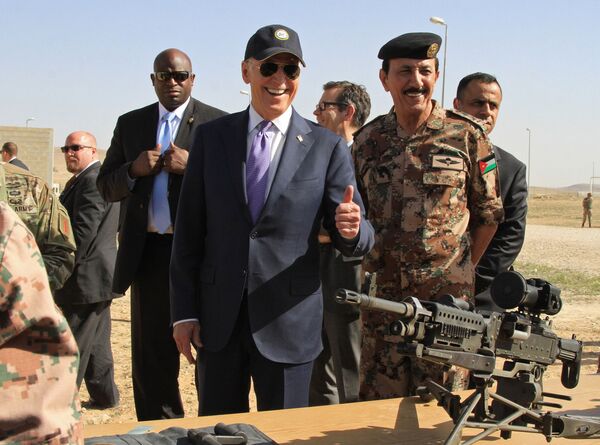 U.S. Vice President Joe Biden, left, visits a joint Jordanian-American training center at Zarqa, northeast of Amman, Jordan, Thursday, March 10, 2016. The Jordanian town was believed to include a training camp for Syrian rebels at the time of his visit.
© AP Photo / Raad Adayleh