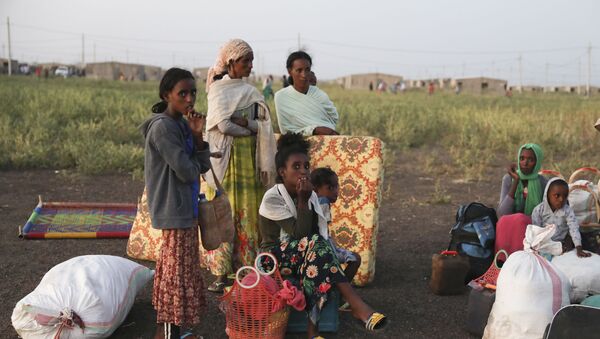 © AP Photo / Marwan Ali
Subscribe
International
India
Africa
Ethiopia has been pushed into violence since early November when federal troops launched an offensive in the northern region of Tigray, claiming that guerrilla troops had attacked a military base. This follows a long-developing conflict that started with the withdrawal of Tigray's largest party from the federal coalition government 2 years ago.

The European Union has temporarily ceased 88 million euros ($107 million) in budget support for Ethiopia until humanitarian agencies are provided access to those in need of aid in the northern Tigray region.

On Friday, EU High Representative Josep Borrell called on Ethiopian Prime Minister Abiy Ahmed to fulfil the values inherent to the Nobel Peace Prize he was awarded in 2019 by working to end the ongoing conflict in Tigray.

“We are ready to help, but unless there is access for humanitarian aid operators, the EU cannot disburse the planned budget support to the Ethiopian government", Borrell said.

A vicious conflict has been raging in #Tigray region of Ethiopia. With devastating consequences for population and regional spill over. Read the blog post by @JosepBorrellF on what the EU is doing: https://t.co/qSQm1zKsQH #AUEU pic.twitter.com/MTXmlADCpn

He said it was in the "best interest of Ethiopia and the wider region" to permit humanitarian access and to "resume the path towards an inclusive and sustainable peace".

"Regional experiences are relevant here: Sudan stared into the abyss of civil war two years ago, before the parties to its political dispute stepped back and chose a peaceful transition instead. Ethiopia was the midwife to that transition, together with the African Union and the United Nations".

"Maybe Khartoum can now return the important effort. But this requires that there first be a de-escalation of tensions between the two countries", he said.

Ethiopia says it is becoming impatient with a Sudanese military build-up in territory populated by Ethiopian farmers on the Sudanese side of a border dispute.

Sudan’s foreign ministry accused the Ethiopian military aircraft of crossing their border in a “dangerous and unjustified escalation”.

While the reports of killings remain unsubstantiated due to a lack of international access to the region, the United Nations said on Thursday major violations of international law had taken place in Tigray at two refugee camps, home to those who fled repression in neighbouring Eritrea prior to the most recent flare-up in violence.

The body claims satellite imagery showed fires burning and fresh signs of destruction at the Shimelba and Hitsats camps but the UN refugee agency, which has criticised the lack of humanitarian access to the sites, has not said who they believe is responsible.

Eritrea’s Information Minister, Yemane Meskel, tweeted on Friday that the UNHCR "seems to indulge, yet again, in another bout of gratuitous & irresponsible smear campaigns against Eritrea".

As it will be recalled, its botched scheme in 2004 of "resettling the Kunama language group in third countries in the West";its preposterous Eligibility Guidelines of 2009 & 2011 peddled to wean the youth from National Service are some of its deplorable excesses in previous years

​Both Asmara and Addis Ababa deny the presence of Eritrean troops in Tigray. However, a senior Ethiopian general has since confirmed that they had crossed into the northern region without invitation.

Over the past 7 years, the EU has provided 815 million euros of development aid to Ethiopia, which comes on top of 409 million euros for projects intended for supporting refugees and host communities in the African nation.

Why is there conflict?

Violence been raging since the 4 November, after Ethiopian Prime Minister Abiy Ahmed ordered a military offensive against the Tigray People's Liberation Front (TPLF), a popular guerrilla organisation in the northern region.

Prime Minister Ahmed claims that the military manoeuvre was a response to the TPLF attacking a military installation where government troops were being housed in Tigray.

In September 2020, Tigray rebuked federal COVID-19 restrictions and held regional parliamentary elections. In response, federal authorities rejected the results, calling the local authorities a "junta" and "fugitives from justice" who must be "made accountable by law" following the November offensive.

The TPLF was the largest political organisation in a ruling coalition since 1991, which took power after the fall of the Derg military regime.

However, after the ascension of Abiy Ahmed to the office of the prime minister, the regional representatives were sidelined by the new government and withdrew in 2019.