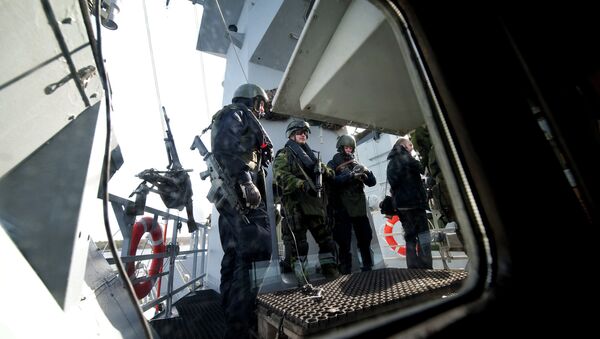 Igor Kuznetsov
All materials
The miniseries, released by the Swedish Armed Forces, invokes an atmosphere of uncertainty amid environmental crises and “grey zone” undertakings by Sweden's enemies, who use psyops and disinformation campaigns.

The TV series “When the War Comes”, released through the Swedish Armed Forces' YouTube channel, has raised many eyebrows in the Nordic country.

The documentary-tutorial crossover admittedly intends to remedy the low awareness about the tasks facing the armed forces and Sweden's defence policy issues in general. It not only features Russia as one of the potential threats facing the country, but also anticipates a drastic expansion of the Swedish military in the coming years.

'When the War Comes' Miniseries by Swedish Armed Forces Features Russia as Threat
The idea behind the series is to present the Swedish public with an updated concept of warfare, that has changed a lot since the Cold War era due to technological advances and security policy shifts, and explain how Sweden would fare in the event of a conflict, ranging from hybrid warfare to a full-blown war.

Russia is mentioned in one of the episodes as an example of a threat due to its “assertive” and “unpredictable” behaviour. This includes the so-called “annexation” of Crimea, which is how Swedish media and politicians tend to describe the peninsula's re-unification with mainland Russia in the aftermath of a popular referendum.

The miniseries, hosted by TV anchor and producer Melker Becker, who is known for his military-related documentaries, invokes an atmosphere of uncertainty amid environmental crises and “grey zone” undertakings, such as psyops and disinformation campaigns.

On social media and in the YouTube comments section, many were take aback by the “When” in the title of the series, arguing this constituted scare-mongering and intimidation. Some noted this was a marked step forward compared with the “If the war comes” information brochure issued in 2018 and the previous 2017 explanatory miniseries called “If the war came”.

Just released - Swedish armed forces raising awareness towards the new threat vectors.
"What happens WHEN the war comes?" is the title of the series. Note, they do not state "if" they say "when". :(#svfm #svpolhttps://t.co/cDjUkPpfll

​“Calm down, this is what modern warfare looks like”, another one reacted, posting a video of a man typing idly at the computer.

“Biggest surprise in the video? That it takes Trump's attempt to buy Greenland seriously, and points out that US tried to set up a base there before, but had to abandon it because of the cold. With climate change Greenland is now an attractive unsinkable aircraft/missile carrier." Thule Air Base in Greenland has been in use by the United States since 1943.

Biggest surprise in the video? That it takes seriously Trump's attempt to buy Greenland, and points out that US tried to set up a base there before, but had to abandon it because of the cold. With climate change Greenland is now an attractive unsinkable aircraft/missile carrier.

​“Unfortunately, I must say that I am not impressed by 'When the War Comes'. It does not live up to the name, is verbose and shows rather 'cool' attack vectors than 'uncool' consequences, e.g. what happens when an entire city gets stomach sick. But I probably don't belong to the target group”, a critical voice said, suggesting that the anchor sounded more like a parody of himself.

​“Stupid through and through. The Armed Forces must replace their screenwriters and production companies immediately!” another unhappy user noted.

​“Not if but when. New approach and typical intimidation propaganda with special interests”, another one mused.

​“Have you ever planned and practised a scenario where America attacks Sweden or is it just the Russians we should be scared of?” a viewer wondered on YouTube.

“The United States will fight Russia to the last Swede,” another mused.

In late 2020, the Swedish government railroaded through its largest defence budget hike since the 1950s and announced a major expansion of its Armed Forces, which have been greatly trimmed down since the Cold War-era. Again, the build-up has been pinned on Russia's “assertive” and “unpredictable” behaviour and military drills held in the Baltic Sea and in western Russia.