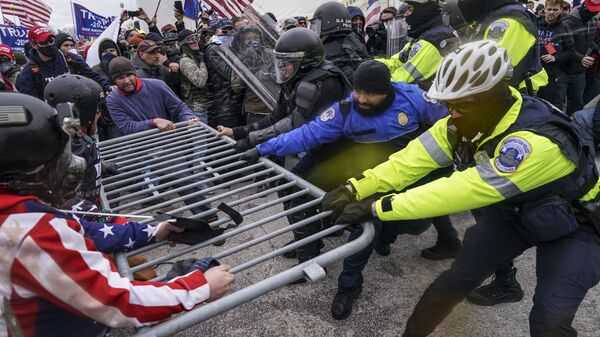 Ilya Tsukanov
All materialsWrite to the author
The US congressional building was stormed by Trump supporters on 6 January, the same day lawmakers met to formally certify the results of the November election in Joe Biden’s favour. The incident left four protesters and one police officer dead, and prompted the Democrat-controlled House of Representatives to impeach the president a second time.

At least 21 current and former soldiers and law enforcement officers have been identified as being at or near the Capitol building during last Wednesday’s unrest, AP has reported, citing a “review of public records, social media posts and videos.”

Along with these soldiers and cops, over a dozen people with a similar background are said to be under investigation.

Among the persons identified was Larry Rendall Brock Jr, a retired Air Force Colonel who was photographed on the Senate floor wearing tactical gear and holding zip tie handcuffs. The veteran was arrested in his home state of Texas and charged in a federal court, with prosecutors accusing him of planning to take hostages. Brock has been placed under house arrest. 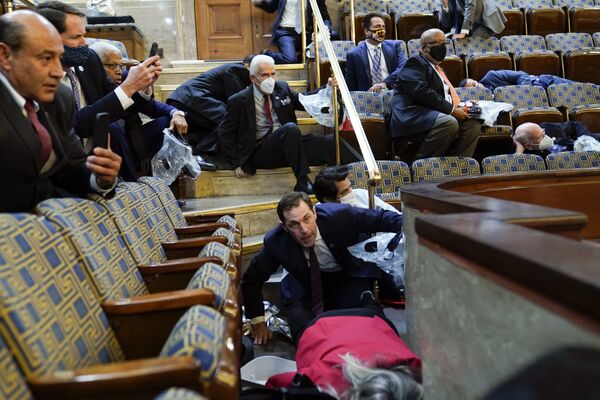 People shelter in the House gallery as protesters try to break into the House Chamber at the U.S. Capitol on Wednesday, Jan. 6, 2021, in Washington.
© AP Photo / Andrew Harnik

Another veteran who has been identified is Ashli Babbitt, a 35-year-old, 14-year veteran of the US Air Force from San Diego, California. Babbitt was shot and killed by a Capitol police officer during the unrest.

Other military and law enforcement personnel believed to be involved in the Capitol storming include a former Navy SEAL from Ohio, a pair of police officers and ex-Army grunts from Virginia, an active duty Army officer from the 4th Psychological Operations Group at Fort Bragg, North Carolina, and others.

The Pentagon remains tight-lipped about how many currently serving personnel are suspected of involvement in the Capitol unrest. On Friday, FBI assistant director in charge Steven D'Antuono said over 100 people had been taken into custody, and that 270 suspects total have been identified in connection with the Capitol attack.

Former Department of Homeland Security assistant secretary for infrastructure protection Brian Harrell called the military and police training among protesters “problematic,” suggesting nearly all of them “have been fed disinformation and propaganda from illegitimate sources,” and calling Trump loyalists’ claims that the election was rigged against the president a “conspiracy theory” fuelling a “powder keg cocktail waiting to blow.”

According to a recent NBC News report, Law enforcement agencies across the US have been carrying out internal investigations regarding the participation of its members in the Capitol siege, with the Capitol Police suspending “several” officers and investigating at least 10. Departments in New York City, Seattle, Philadelphia and other cities are carrying out their own probes, said to be based on “tips” including social media posts. The FBI has asked the public to help identify individuals in footage and photos of the unrest.

Joint Chiefs of Staff: US Capitol Riot Was ‘Direct Assault’ on American Democracy
On Tuesday, a memo signed by the Joint Chiefs of Staff described the Capitol violence as a “direct assault on the US Congress, the Capitol building and our Constitutional process,” and emphasised to service members that “the rights of freedom of speech and assembly do not give anyone the right to resort to violence, sedition and insurrection.” It also reminded soldiers, sailors and airmen that it is their duty to protect the Constitution “against all enemies, foreign and domestic.”

Portraying himself as the president of "law and order" and someone who was against embroiling the US in new overseas wars, Trump amassed a high level of support among both police and the military in 2016 and throughout his four years in office. In 2020, major police unions across America endorsed Trump for reelection. In October, polling by the Military Times found that 52 percent of veterans planned to vote for Trump, compared to about 42 percent for Biden, with the remainder saying they would vote third party or stay at home on 3 November.