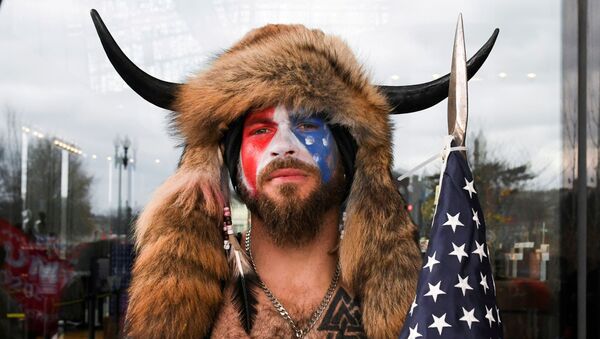 © REUTERS / STEPHANIE KEITH
Subscribe
So far, the FBI has identified more than 200 suspects in the 6 January Capitol riots; over 100 people have been arrested and charged with felonies ranging from violating the curfew to theft and weapons possession.

A lawyer for one of the Capitol rioters, known as the "QAnon shaman" has asked for a presidential pardon for his client, claiming that the protester, whose real name is Jacob Chansley, just answered the call of Donald Trump, ABC News reported.

"My client did not break into the Capitol, my client had the doors of the Capitol held for him by Capitol police. Mr. Trump invited him to enter the Capitol during his speech prior to the riot," lawyer Albert Watkins said.

At the same time, his lawyer says that his client isn't a violent person and should be pardoned, as he felt "he was answering the call" of Mr. Trump by entering the building.

Jacob Chansley, also known as Jake Angeli, was in the military, had no criminal history and was a "genuine shaman", the lawyer said, noting that his client practices yoga and meditates all day long.

According to the lawyer, Donald Trump should be held accountable for encouraging rioters and give his presidential pardon to them.

Chansley is said to be a follower of the QAnon conspiracy theory that alleges that a cabal of Satan-worshipping cannibalistic paedophiles is running a global child sex-trafficking ring and plotting against Donald Trump, who is fighting the cabal. During the riots, Chansley was photographed wearing a fur hat with horns, face paint and holding a spear.

On January 6, pro-Trump protesters stormed Capitol Hill in a bid to prevent Congress from certifying the presidential election victory after Trump urged them to not allow the election to be stolen. Five died and more than 170 cases have been open by police in connection with the riots.