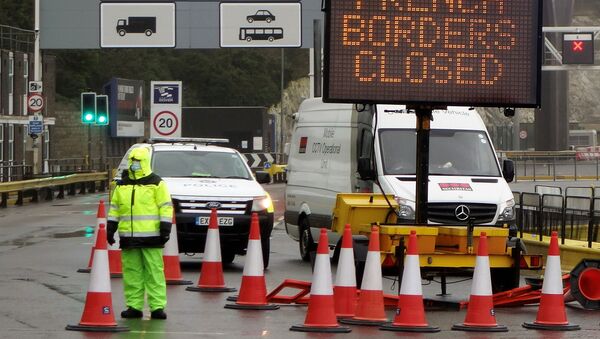 Svetlana Ekimenko
All materialsWrite to the author
As countries around the world roll out COVID-19 vaccines and enforce lockdown measures to stop the spread of the virus, health authorities have been forced to contend with the further challenge of a more contagious form of the coronavirus first found in the UK.

Amid a flurry of concerns that new COVID-related controls for hauliers entering France from the UK might generate chaos at the border, French Transport Minister Jean-Baptiste Djebbari announced on Friday there would be no change for now, pending a coordinated EU approach to curbing the spread of the pandemic.

​Djebbari said in a series of tweets that previous provisions requiring truck drivers entering France from Britain to provide a negative COVID-19 test would remain unchanged. 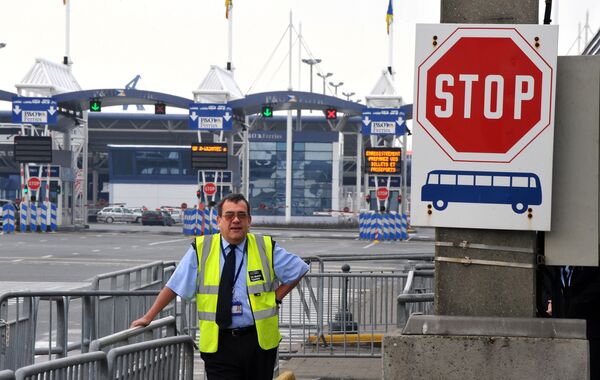 A member of the UK Border agency stands at the entrance of the Channel Ferries in Calais, northern France, on January 27, 2009 .
© AFP 2022 / Philippe Huguen

Earlier, France announced that people travelling from non-EU countries would no longer be able to enter the country by virtue of having a negative result from a rapid lateral flow COVID-19 test.

Fallout from the measure, announced by French Prime Minister Jean Castex, had triggered fears that post-Brexit border challenges would be further compounded by the need for a negative PCR test to be confirmed before entering the country.

The lateral flow tests that hauliers are subjected to by the British government are faster, but potentially less accurate.

Known in France and many European countries as either the British or English variant, it's been proven to be more contagious, with the UK's Office for National Statistics reporting that it now accounts for more than 60 percent of positive tests in England, and more than 80 percent in London. 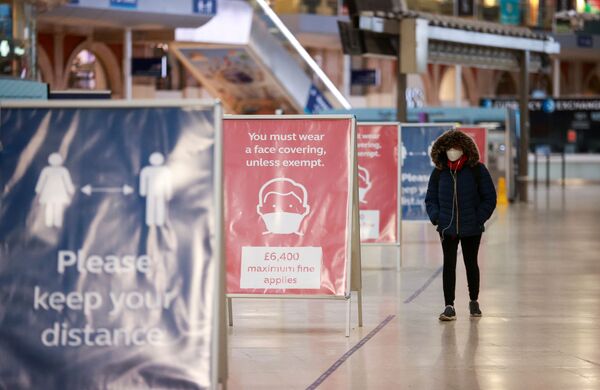 The UK is in the midst of its third national lockdown, with schools shut and people ordered to stay at home as the new virus variant has contributed to a surge in cases in recent months.

Government statistics show that on 14 January, 48,682 new coronavirus cases were confirmed in the country.

A University of Cambridge lab, led by clinical microbiologist Ravi Gupta, described the mutation in December a series of tweets, noting it involved the deletion of two genes involved in the "spike protein" on the coronavirus.

​The spike protein is responsible for both the virus' ability to infect human cells and for human immune systems to detect and fight the virus. Despite efforts to contain the spread of the pandemic and this new strain in particular, clusters have popped up across France and in other countries.

Northern France, which has been implementing an intensive programme of COVID-19 testing, has also been supplementing the screening measures by checking if people are infected with the new coronavirus strain. The test is more thorough, with the results taking hours.

Jean-Philippe Dancoine, a local doctor and deputy mayor of the town of Roubaix, was quoted by Sky News as saying:

"The more we look, the more we will find of this variant."

Dancoine also voiced his disappointment over what he sees as Britain's lax efforts to contain the virus.

"I don't think people are fully aware yet of the danger of the English variant. It's more contagious, so it will require people to be more careful and be more strict about rules and wearing masks. We can see that the wearing of a mask, and the control measures, have been less strict in Great Britain than in Spain, France or Italy," he said.

A chorus of voices across Europe has been reproaching the UK for not enforcing measures needed to curb the spread of the pandemic.

"I think that part of the explanation for the exponential rise of the virus in the UK is the not-so-clear policies, and relatively relaxed policies, that were leading up to Christmas. They surely did not help. And it explains part of the epidemic," Marc van Ranst, Belgium's leading virologist and a adviser to the national government was quoted as saying.

The new strain has brought with it the threat of turning an "epidemic that was getting under control and putting it out of control again," says Van Ranst.

According to the virologist, only tougher restrictions at the borders, calls to discourage travel, heightened track and testing, and even cuts to Eurostar services between Brussels and London will help control the spread.

"People being able to travel freely is a vulnerability, and it's probably something that we need to rethink if we're really going to be serious about trying to halt the British variant," he said.

In Germany, Chancellor Angela Merkel wants to see tighter lockdown measures introduced, including a curfew and a ban on public transport, according to reports, amid concerns over the new strain of the coronavirus.

New measures, set to be discussed at a meeting of senior officials next week, according to Bild, could include a ban on both local and long-distance public transport in Germany.