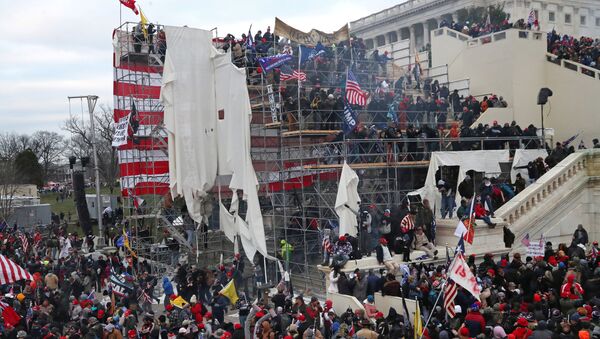 MOSCOW (Sputnik) - The Federal Bureau of Investigation (FBI) identified and arrested an Arkansas man who was seen beating a police officer with a flagpole during the riot in the United States at the Capitol building, KATV TV channel reported on Friday, citing the FBI.

According to the broadcaster, Peter Francis Stager was identified after posting a video of the beating on Twitter during the January 6 riot. The video showed Stager repeatedly hitting a Washington police officer with an American flagpole, while the police officer was lying on the ground.

"Everybody in there is a treasonous traitor. Death is the only remedy for what’s in there," Stager said in one of the videos commenting on the occupation of the Capitol building.

One person who identified Stager in the video told the authorities that Stager mistook a policeman for a member of the ultra-left Antifa movement, although the officer was wearing a uniform.

On 6 January, supporters of the incumbent US President Donald Trump stormed the Capitol after a Trump rally in Washington. The Congress work was interrupted for several hours during the riots, which claimed five lives, including those of Capitol police officer Brian Sicknick and Trump supporter Ashli Babbit. After law enforcement removed rioters from the Congress building, congressmen approved the victory of Democrat Joe Biden in the 2020 presidential election.