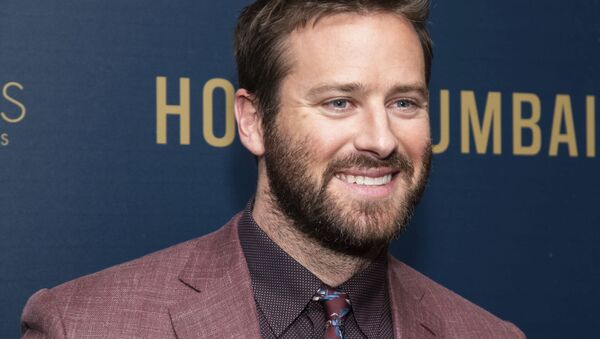 Aleksandra Serebriakova
Moscow-based Sputnik correspondent specializing in foreign affairs.
All materialsWrite to the author
‘The Social Network’ actor Armie Hammer has found himself at the epicenter of public scrutiny after an anonymous Instagram account posted a series of screenshots allegedly featuring conversations between the actor and other women. In one, the Hollywood star had allegedly described himself as “100 percent a cannibal”.

Armie Hammer’s most recent ex-girlfriend, Courtney Vucekovich, told Page Six that her former beaux was not shy about sharing his Hannibal Lecter-inspired fantasies and even once vowed to roast parts of her body.

“He said to me he wants to break my rib and barbecue and eat it,” Vucekovich claimed. “’F**k that was weird,’ but you never think about it again.”

The woman, who is the founder of beauty app Flashd, said she was not surprised by recent ‘cannibalism’ allegations against her ex, following his behaviour during their time together, which she has found rather odd:

Alexander Wang Denies ‘Baseless, Grotesquely False’ Sexual Assault Accusations From Male Models
The couple was dating from June to August 2020 and ended when Hammer left following a fight. Vucekovich said she had to enter rehab after a several-week relationship with “obsessive” Hammer, who was allegedly emotionally abusive and patronising, while also pushing the influencer towards some “out-of-character” sexual acts.

“He makes you feel bad for him, and that’s really scary and keeps you [close to him],” Vucekovich argued. “He needs you. He actually needs you.”

According to the app founder, her former lover has been “the most broken” person she’s ever came across: “He blows up [women’s] lives like that and walks away,” she said.

“He kind of captivates you and while being charming, he’s grooming you for these things that are darker and heavier and consuming. When I say consuming, I mean mentally, physically, emotionally, financially, just everything,” Hammer’s ex added.

Vucekovich’s accusations came following a viral scandal around the actor’s alleged cannibalism-inspired conversations with other women.

‘I Decide When You Eat’

On 10 January, anonymous Instagram account House of Effie shared a series of screenshots of messages, said to be coming from Hammer’s official Instagram account, where he was allegedly asking one person if he could “cut off” one of her toes in a bid to “keep it with me in my pocket so I always had a piece of you in my possession.”

In another one, the actor allegedly vowed to “decide when you eat, when you sleep, when you …, when you use the bathroom,” or even "drink blood" of his partner, all while describing the women in question as his slaves.

In one of the purported messages, the actor had apparently called himself a “100 per cent a cannibal.”

The screenshots immediately became a viral trend, causing horror among the net.

So Armie Hammer apparently is a whole ass cannibal and creepy ass motherfucker. I'm out of words tbh. pic.twitter.com/vkIeEuZN8U

Everyone: Armie Hammer is a cannibal omg
Me: Come on guys, that’s gotta be an exaggeration
Armie Hammer: pic.twitter.com/goKoom9DmE

Many suggested that the screenshots in question could have been faked as there is no proof of their authenticity. Vucekovich also could not tell Page Six whether they had been genuine, but could not say whether they were untrue either.

One of the most recent allegations posted in the House of Effie account’s stories even features anonymous rape accusations against the “Call Me by Your Name” star. House of Effie now has over 52,000 followers. 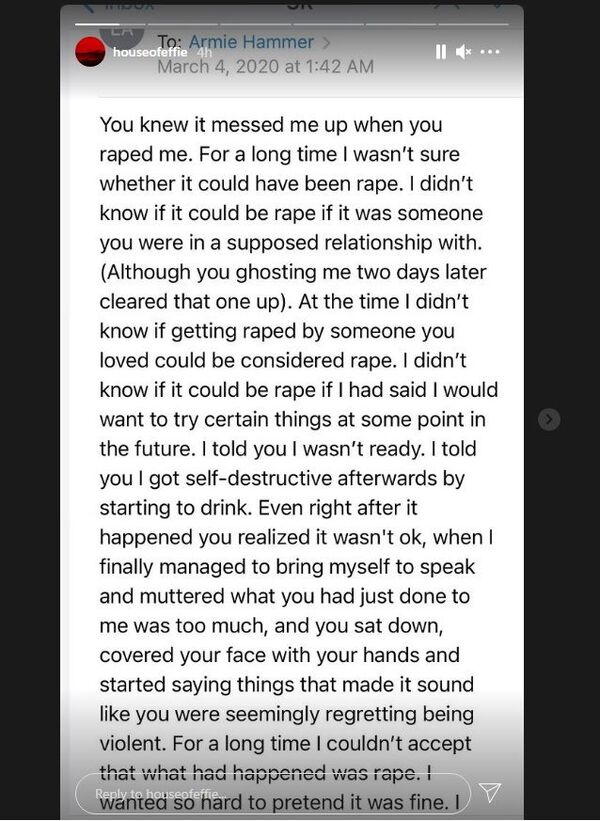 The actor himself told Page Six that he was not going to respond to “these bull**t claims.” However, he confirmed that he was now stepping down from “Shotgun Wedding”, a movie with Jennifer Lopez, “in light of the vicious and spurious online attacks” against him.

“I cannot in good conscience now leave my children for four months to shoot a film in the Dominican Republic. Lionsgate is supporting me in this and I’m grateful to them for that,” the actor said in a statement to the media.

Hammer is currently in the middle of divorce proceedings with his wife of 10 years Elizabeth Chambers. The couple, which announced their separation last year, has two children together, 6-year-old Harper and 3-year-old Ford. Hammer is currently fighting with his ex to have joint custody over their kids.