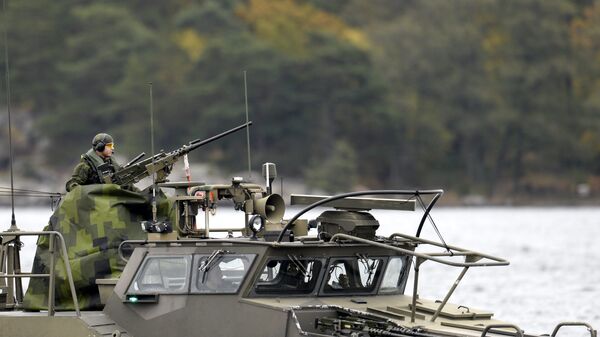 Igor Kuznetsov
All materials
The series rotates around the idea of growing uncertainty due to climate change and the impact of technological development utilised by foreign countries in an adverse way.

The TV series “When the War Comes”, released by the Swedish Armed Forces' YouTube channel, features Russia as one of the potential threats facing the country.

Each of the roughly ten-minute-long episodes hosted by anchor and producer Melker Becker, known for his defence-related documentaries, deals with the highlights of a potential war: Uncertain Future, Gray Zone, Future Battlefield, Global Defence, and What's Worth Protecting.

“The series will increase knowledge about the Armed Forces, operations and the challenges we will face in the future,” marketing manager Johan Landeström of the Swedish Headquarters communications department said in a statement. The series is based on scenarios developed by the Armed Forces and other authorities,” Johan Landeström explained further.

The ambition behind the series is to describe how a conflict would affect Swedish society and what demands it would palce on Sweden's future military defence. The overall message is that the Cold War-era concept of threats is outdated and that the country is facing new, more complex challenges, the military said.

Russia is mentioned in one of the episodes as an example of a threat due to its “assertive” and “unpredictable” behaviour. This includes the so-called “annexation” of Crimea, which is how Scandinavian media often refer to the peninsula's re-unification with mainland Russia following a popular referendum.

The main theme of the series, however, is the issue of global warming and climate change, which spurs an increased interest in the Arctic among the world powers due to its valuable natural resources and maritime routes. Once again, Russia is referenced as a potential threat due to its territorial claims on the Arctic shelf. The Swedish series draws particular attention to the fact that in 2007 a titanium Russian flag was planted on North Pole seabed in a record-breaking dive.

Based on the series, the Swedish Armed Forces seem to imply that the war of the future will be predominantly hybrid, and that the United States will act as one of the country's main allies.

“The clear message is that the armed forces and the civil defence will together constitute the threshold effect that should act as a deterrent to a potential attacker,” the armed forces concluded.

The miniseries is largely a continuation of the 20-page brochure “If the War Comes” that was distributed among Swedish households in 2018 and warned them of contemporary dangers such as psyops and influence operations by state actors.

This is hardly the first time the Swedish military and politicians have used Russia (alongside China) as a scare example. Both have been frequently featured in various reports issued by the country's armed forces and security services. Among others, the same kind of rhetoric about Moscow's “assertive” and “unpredictable” behaviour has been utilised by the top brass to justify the recent defence budget hike, adopted in late 2020 and referred to as the largest since the 1950s.

While formally retaining its non-aligned status, Sweden has in recent years been increasingly drifting toward NATO to form a lasting partnership. Among other nations, Sweden has become a regular participant in the alliance's drills, including those in Eastern Europe in Russia's immediate proximity.

A recent poll revealed that the Swedish population remains as divided as ever about NATO accession, an issue which continues to polarise the nation's parliamentary debate.