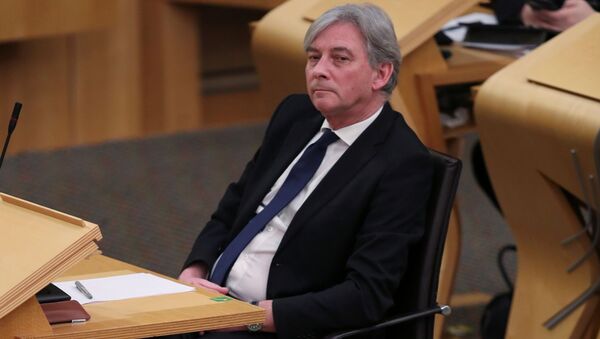 © REUTERS / RUSSELL CHEYNE
Subscribe
As the Labour Party in Scotland saw an increasingly diminished role in both Westminster and Holyrood since the rise of the Scottish National Party in 2015, MSPs expressed their doubts over Richard Leonard's ability to lead the party to electoral success.

Richard Leonard has stepped down as Scottish Labour leader, saying that his resignation was in the "best interests of the party".

Leonard said he considered speculation over his leadership to be a "distraction" and would be standing aside from his position with immediate effect.

"I have thought long and hard over the Christmas period about what this crisis means, and the approach Scottish Labour takes to help tackle it," he said in a statement. "I have also considered what the speculation about my leadership does to our ability to get Labour's message across. This has become a distraction".

Labour leader Sir Keir Starmer said that Mr Leonard should be "very proud" of his accomplishments as leader of the party in Scotland.

"Richard has led Scottish Labour through one of the most challenging and difficult periods in our country's history, including a general election and the pandemic."

Leonard, who is considered to be on the left of the party, had been subject to calls to quit by many of his own MSPs last year over concerns that his leadership could be electorally problematic at the forthcoming Scottish Parliament election in May.

Polling has indicated that has failed to make serious inroads into Scottish politics with even Labour supporters being unable to identify him and party members questioning whether he was capable of turning around the organisation's diminishing electoral status.

Leonard led the party for three years after Kezia Dugdale resigned in 2017. His resignation follows the standing down in July 2020 of the Conservative Party's Scottish leader, Jackson Carlaw, over concerns that he was not the best placed to make the argument for the United Kingdom in the face of rising Scottish nationalism.

Labour was once the largest party in Scottish politics (and had been so for decades), is at present the third-largest party in Holyrood, behind the Scottish National Party (SNP) and the Conservatives.

Since the rise of the SNP in 2015, Labour has lost almost all their Scottish seats in Westminster. As of the 2019 general election, Labour has just one remaining Scottish MP.