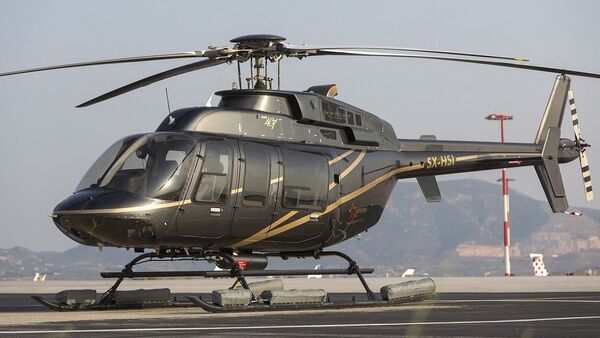 Aleksandra Serebriakova
Moscow-based Sputnik correspondent specializing in foreign affairs.
All materialsWrite to the author
Not UFOs or satellites, but some hardcore choppers have been seen circulating around California during the week – but the purpose of these flights, as well as their origin, has remained a mystery.

Three dark-coloured helicopters with no clear identification marks have prompted The Driver’s The War Zone observers to engage in guesswork after the aircraft were first spotted above Los Angeles by an aviation enthusiast on 12 January.

The machines reportedly landed in California’s KBUR, also known as Hollywood Burbank Airport, and then flew around LA on their way to the Los Angeles County Fire Department’s Camp 8, flight tracking software indicated, as cited by The Drive.

Plane gazer Scott Lowe also provided images of the machines to the media, which apparently revealed their serial numbers - 121141, 121142, and 121143 – figures very similar to those that have been associated with helicopters earlier purchased by Iraq but reportedly left at US Redsone base in Alabama “in accordance with the Iraqis' wishes for the aircraft's future development and testing.” The media argues that it “seems very likely” that the detected flyers have serials associated with Iraqi’s purchase but this could not be independently confirmed as there are also some differences in configuration in planes originally bought by Iraq and abandoned in the United States to those caught on camera in LA.

According to the media, the audio exchange between the pilots of the choppers reveals the “Mike 01” callsign used by the group of aircrafts, suggesting their association with US military special operations when one callsign is used for the entire flight.

The War Zone expert believes that the Bell 407s could have been used by FBI’s elite Hostage Rescue Team operators responsible for counter-terrorism actions or even by the US Army’s secretive aviation unit Aviation Technology Office previously called the Flight Concepts Division. The organization, which is tasked with providing support to covert mission, is linked to functioning of the Central Intelligence Agency.

At this point, none of these guesses could be confirmed with certainty.

On 13 January, all three choppers were spotted on the way to San Bernardo and then near Huntington Beach before their return to Burbank’ All three carried some visible communications systems antennas and military mission-associated skids, but no “sensor turret” that could be used for the application of infrared cameras, the observers note. So the purpose of the unmarked helicopters remains a mystery, yet to be unveiled.