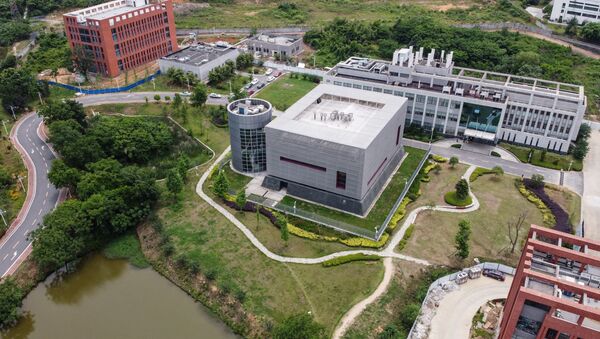 Morgan Artyukhina
All materialsWrite to the author
After months without a significant number of COVID-19 cases, several dozen new cases in just a few days have sent millions in China back into lockdown, threatening to cancel Spring Festival celebrations for a second year in a row.

A recent story by the Associated Press on the international World Health Organization (WHO) team that has traveled to the Chinese city of Wuhan to ascertain the origins of the COVID-19 pandemic appeared to present a heavily distorted view of the issue, forwarding a narrative concocted by Western governments that seeks to demonize Beijing and undermine the country’s reputation.

“A global team of researchers arrived Thursday in the Chinese city where the coronavirus pandemic was first detected to conduct a politically sensitive investigation into its origins amid uncertainty about whether Beijing might try to prevent embarrassing discoveries,” reads the opening paragraph of AP’s Thursday story. It also served as a text of a tweet of the story, although a typo yielding “uncertainly” provided Liu Xin, a news anchor on China Global Television Network (CGTN) with fodder for a witty reply pointing out the story’s bias.

​“‘Uncertainly’? There's certainty @AP is NOT doing a professional job trying to tell us what to think,” she wrote on Thursday.

"Uncertainly"? There's certainty @AP is NOT doing a professional job trying to tell us what to think. pic.twitter.com/tYt7Ktdw1K

The angle of the story is essentially that Beijing has long attempted to frustrate an investigation by the WHO and is likely to continue to do so over fears that China will be proven to be the origin of SARS-CoV-2, the virus that causes COVID-19, and that the Chinese government failed to take adequate measures to contain it.

The team arrived on Thursday and includes 15 scientists from the US, Australia, Germany, Japan, Britain, Russia, the Netherlands, Qatar and Vietnam, who have taken COVID-19 tests and entered a two-week quarantine period in Wuhan. Two were asked to return to Singapore because they tested positive for COVID-19 antibodies.

The Hong Kong-based South China Morning Post noted that the trip will give the international team a chance to access data collected by Chinese researchers that has not yet been publicly shared. According to the paper, that will include searching medical records for evidence of earlier cases missed by Chinese doctors, testing stored medical samples for traces of the virus and a probing of the sources for the Huanan wet market in Wuhan that became the epicenter for the city’s outbreak in late 2019 and early 2020.

Aside from AP’s suggestive wording, there hasn’t been anything to indicate the group will encounter any kind of resistance or lack of cooperation from Chinese authorities - in fact, they have welcomed the team.

“Scientists suspect the virus that has killed more than 1.9 million people since late 2019 jumped to humans from bats or other animals, most likely in China’s southwest. The ruling Communist Party, stung by complaints it allowed the disease to spread, has suggested the virus came from abroad, possibly on imported seafood, but international scientists reject that,” the AP story says.

What AP fails to mention is that the “scientists” cited in the first sentence are also Chinese. Shi Zhengli, director of the Center for Emerging Infectious Diseases at the Wuhan Institute of Virology, is so well known for her research on the relationship between bats and various members of the coronavirus family that she’s known as “Batwoman.”

Shi told the BBC last month she would “personally welcome any form of visit, based on an open, transparent, trusting, reliable and reasonable dialogue.”

Another passage in the AP story says, “The Chinese government has tried to stir confusion about the virus’s origin. It has promoted theories, with little evidence, that the outbreak might have started with imports of tainted seafood, a notion rejected by international scientists and agencies.”

In fact, the theory has more than a little scientific backing, although it’s worth noting that it’s only been floated as a potential vector for SARS-CoV-2 that was proposed after several new infection hotspots seemingly spontaneously arose in several countries in August, and Chinese scientists have made no firm claims about it being to blame for the disease entering the country.

In October, a group of scientists at China’s Xi’an Jiaotong University and Lanzhou University published a study in Environmental Chemistry Letters describing how SARS-CoV-2 can survive temperatures as low as negative 80 degrees Celsius for as long as 21 days. The paper theorizes a contamination of the food by handlers with COVID-19, not of the animals themselves, but notes that “data are lacking on long-term survival and infectivity under these conditions” and advises more research into this area.

That advice is essentially the same as that given to AP by Timothy Newsome, a virologist at the University of Sydney, for a November 24 story purporting to debunk the claim.

“It is possible and may represent some risk, but it’s certainly at the lower end of risk for transmission,” Newsome told AP at the time, noting that it’s possible for viral traces detected to be either infectious or non-infectious. “We know low temperatures do stabilize the virus. Nonetheless, I think things which have been transported and surface transmission - there’s a low risk of it.”

An August fact sheet by the WHO - from before the report on SARS-CoV-2’s cold tolerance - dismisses the notion that food can be a vector for COVID-19, although it makes no specific mention of frozen food and does note that contamination by workers handling food and packaging is still possible.

However, after wrongly casting doubt on several Chinese claims, AP then presents an outright conspiracy theory as a viable candidate for SARS-CoV-2’s genesis: that it escaped from a Wuhan Institute of Virology research laboratory.

The notion was given wide currency by US President Donald Trump, who leveled the claim in May as US deaths from COVID-19 skyrocketed, even though earlier rumblings about a “plandemic” or an artificial origin for the virus were being disproven by scientists as early as March 2020, when its complete genome had been sequenced, revealing a natural origin.

The suggestion was further dismissed by Trump’s own Office of the Director of National Intelligence, which issued a rare statement on April 30 last year, noting, "The Intelligence Community also concurs with the wide scientific consensus that the COVID-19 virus was not man-made or genetically modified.”

Nonetheless, AP presents this as a valid theory with almost none of the pushback given to Chinese theories, and cites Scottish epidemiologist Mark Woolhouse, who pushed the now-discredited “Swedish model” of dealing with COVID-19 on the British government last autumn, as saying such an audit of the virology lab would be a “routine activity.”