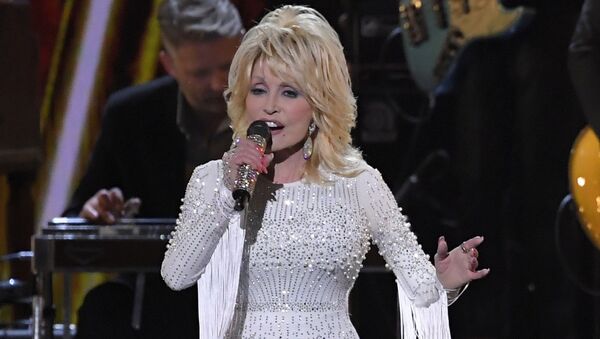 © AP Photo / Mark J. Terrill
Subscribe
Mary F.
All materialsWrite to the author
Dolly Parton, 74, is an American singer and songwriter best known for her country music. Parton made her debut in 1967 with her album “Hello, I’m Dolly,” which propelled her successful career. She was born in Sevierville, Tennessee in 1946.

State Rep. John Mark Windle, a Democrat in the Tennessee legislature, on Tuesday introduced a bill to add a statue of Parton to the state’s Capitol grounds in Nashville to recognize her contributions to her home state. Windle’s bill calls for the establishment of a fund for the statue's design, construction and installation, which would be paid for by gifts, grants and other donations, The Hill reported.

Parton is a humanitarian who has a history of giving back. In addition to helping fund research for Moderna’s COVID-19 vaccine, the Grammy winner has engaged in other philanthropic pursuits, such as founding the Imagination Library, a book-gifting program that provides free books to children in the US, the UK, Canada, Australia and the Republic of Ireland.

“History should not be forgotten, but we need not glamorize those who do not deserve our praise. Instead, let us honor a true Tennessee hero, Dolly Parton,” wrote Alex Parsons, the individual who started the petition.

“Aside from her beautiful music, which has touched the hearts and lives of millions of Americans, Dolly Parton's philanthropic heart has unquestionably changed the world for the better,” Parsons added.

“From the Dollywood foundation that has provided books and scholarships to millions of American children, to the millions of dollars she has donated to dozens of organizations such as the Red Cross and COVID-19 research centers, Dolly Parton has given more to this country and this state than those Confederate officers could ever have hoped to take away,” Parsons continued.

Last month, former US President Barack Obama said a major “screwup” of his administration was failing to honor Parton with the Presidential Medal of Freedom.

"That's a mistake. I'm shocked," Obama said on CBS' "The Late Show" after host Stephen Colbert asked how it was possible the singer had yet to receive the US' highest civilian award.

"She deserves one," Obama said, adding that he would call US President-elect Joe Biden about the matter.