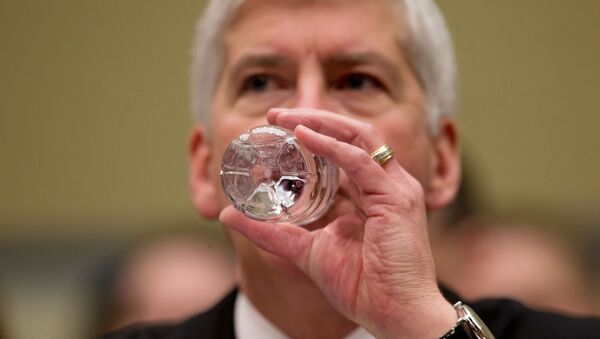 Gaby Arancibia
All materialsWrite to the author
The Flint water crisis began in early 2014 when city officials decided to switch the community’s water source as a cost-saving measure; however, the move subsequently prompted lead to leach out of corroded pipelines. The water switch is also believed to be responsible for an outbreak of Legionnaires' disease that killed 12 individuals.

Emerging reports revealed on Tuesday that former Gov. Rick Snyder (R-MI) would soon be getting hit with criminal charges stemming from the recently renewed investigation into the devastating Flint water scandal.

A pair of sources informed the Associated Press that the office of Michigan Attorney General Dana Nessel had informed defense lawyers that indictments would be coming, and as such, to anticipate court appearances.

Although the outlet was unable to “determine the nature of the charges,” the individuals placed under the investigative office’s microscope include Snyder, former health department director Nick Lyon and Snyder’s former top aide Rich Baird, among other former officials.

Randy Levine, Baird’s attorney, told the AP he was informed on Monday that his client would be facing charges as part of the new investigation that was launched in 2019. The attorney remarked that Baird was never ordered to investigate the crisis, “but rather he raised his hand and volunteered.”

Unlike Baird's legal representative, Snyder’s lawyer Brian Lennon lashed out by saying the looming indictments would be “outrageous.” He added, “Rather than following the evidence to find the truth, the Office of Special Counsel appears to be targeting former Gov. Snyder in a political escapade.”

Snyder served as the Great Lakes State’s governor when state-appointed officials decided to flip Flint’s water source from Lake Huron to the Flint River, a nearly 80-mile-long body of water that flows through several Michigan counties. The switch was carried out as a way to cut costs; however, almost immediately, residents began noticing that the water was cloudy and gave off a foul smell.

The subsequent water crisis that emerged revealed a failure to apply corrosion inhibitors to the city's water pipes when the water source was changed and ultimately exposed tens of thousands of residents to dangerously toxic levels of lead.

Estimates suggest that as many as 12,000 children were exposed to lead in their drinking water, raising concerns of developmental damage, as the toxic element can cause serious brain and nervous system issues. At the same time, the water change is also believed to be responsible for the outbreak of Legionnaires' disease that affected at least 90 individuals and killed some 12 people. The disease is a type of pneumonia that spreads through water mist.

The Flint crisis drew national interest and quickly became an example of widespread governmental mismanagement, environmental mistreatment and racism, as residents of the majority-Black city were forced to line up for bottled water.

While in office, Snyder acknowledged in 2016 that the state's government had failed at every level, and that he had been informed of the Legionnaires' outbreak weeks before speaking on the subject to the press.

A judge previously ruled in 2019 that Flint residents were clear to file class action lawsuits against a number of former state and local officials, including Snyder, over the massive water scandal.

Courtney Covington Watkins, a spokesperson for the attorney general's office, told the AP that officials intended on revealing specifics of their investigation "as soon as we're in a position to do so."