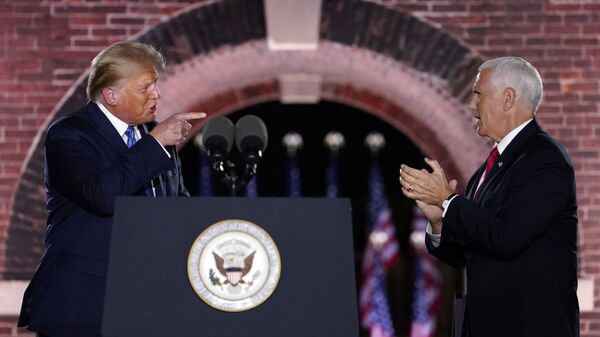 © AP Photo / Andrew Harnik
Subscribe
International
India
Africa
Daria Bedenko
All materialsWrite to the author
Despite Donald Trump's fury over the outcome of the 2020 presidential race and claims of election fraud, Vice President Mike Pence did not object to the vote results, certifying Joe Biden's victory, even as the congressional session was disrupted by a deadly riot of Trump supporters in the Capitol building itself.

Outgoing US President Donald Trump, speaking to Mike Pence before the 6 January certification of the election results, went from "cajoling" to "browbeating", and ended up offering a choice to his vice president, according to a Tuesday report by the NYT citing two people "briefed on the conversation".

Trump reportedly pushed Pence to a series of meetings a day before the vote, with one particular encounter taking about an hour as a Chapman University conservative constitutional scholar, John Eastman, convinced the vice president that he did have the power to act.

Shortly before the vote on 6 January, Pence's personal attorney, according to the report, called a former appeals court judge, J. Michael Luttig, who wrote up a contradictory opinion, which was then cited by Pence in his statement on the decision not to block the Electoral College vote. The move reportedly prompted Trump to call Pence and curse at him.

"I hope he doesn't listen to the RINOs and the stupid people that he's listening to", Trump, cited by The New York Times, later said at his rally, referring to the VP. 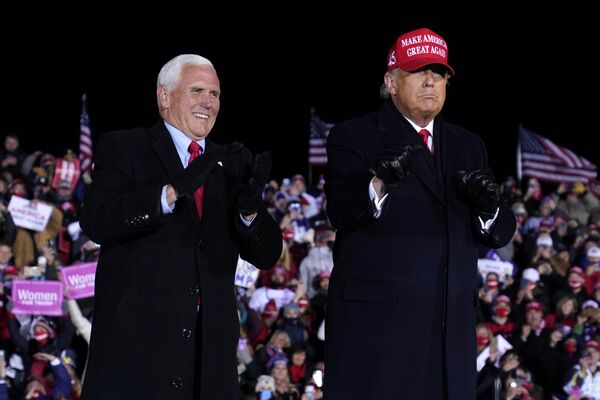 Despite Trump's reported demands, Pence did not object to the certification of Biden's victory. The joint session, however, was disrupted by a deadly attack on the US Capitol building, after which Pence, along with lawmakers, was evacuated.

According to reports, Trump met the vice president in the Oval Office five days after the violent attack. The conversation was described by The Hill as "good", although a NYT piece claimed that, unofficially, the description of the talks was "nonsubstantive" and "stilted".

While Trump faces accusations of inciting the violent insurgency - something he has denied - some lawmakers from both sides of the US political fence will try to invoke Section 4 of the 25th Amendment to declare him "unfit" for the presidency and oust him from office, urging Pence to join the initiative.

Pence on 25th Amendment Invocation: 'I Will Not Yield to Efforts to Play Political Games'
The vice president, however, told House Speaker Nancy Pelosi on Tuesday that he does not believe invocation of the 25th Amendment "is in the best interest of our nation or consistent with our Constitution". He warned that it could cause a "terrible precedent" and said that he was not willing to "exert power beyond his constitutional authority".

As the vote for the resolution to ask the vice president to use the legislation against Trump is ongoing in the House, POTUS also faces a second impeachment. House Democrats rolled out a resolution accusing the president of "inciting insurrection", with a vote scheduled for Wednesday.

The brutal Capitol riots, which saw five killed, were seen by many as notably harming Trump's popularity and causing many members of the Republican Party to break ties with him, including Pence, who has been "very loyal" to POTUS over his four-year term. Now, according to some experts, Pence will have to attempt to distance himself from Trump to advance his own political career.