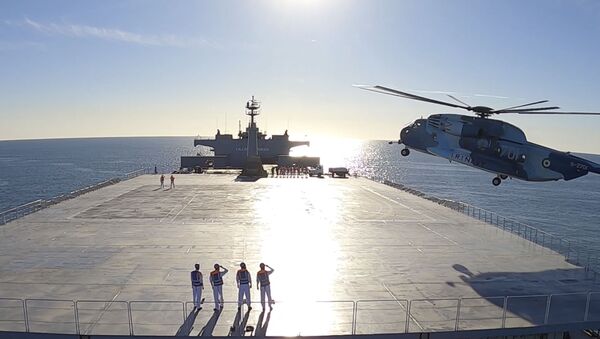 Tim Korso
All materials
The Iranian military routinely holds several annual exercises to maintain readiness for possible attacks by foreign powers. Over the past few years, the country was twice on the verge of a military conflict with the US, but both times avoided engaging in war.

The Iranian Navy has launched two-day drills called Eghtedar-99 in the Gulf of Oman. The Eghtedar (Power) wargames are held on an annual basis, with this year's drill distinguished by the presence of a new domestically-produced heliopter carrier Makran, which the Iranian media called the "largest" warship in the Islamic Republic's fleet.

#Iran's largest navy vessel – a helicopter carrier – and a ship capable of firing missiles have officially joined the country's fleets as the army holds another military drill, this time in Makran and the Sea of Oman.

Everything is reportedly made locally. pic.twitter.com/K0TYT6b4pw

Apart from being a floating launchpad for seven military helicopters, Makran can also serve as a supply vessel, capable of carrying up to 100,000 tonnes of fuel and freshwater. The newly made warship can operate without entering a port for resupply for up to 1,000 days, according to the Iranian military.

The Eghtedar-99 drills will also feature the corvette Zereh. The ship will conduct missile launch exercises in the Gulf of Oman.

Makran Forward Base Ship, a tanker turned vessel officially joins #Iran’s Navy. She has been sailing in the vicinity of the Strait of Hormuz in the #PersianGulf.This can give #Iranian predator drones and choppers more leeway and maneuvering power. pic.twitter.com/nLAvd3nbgE

Iran has been gradually advancing its domestic defence industry in light of spending years under international sanctions that prevented the country from importing weapons. Despite the ban being lifted in 2020 by almost everyone except the US, who opposed the move, Tehran intends to continue developing its domestic industry, including in terms of naval weaponry.

Naval exercises remain one of the Iranian military's priorities because US warships, despite protestations from Tehran, routinely visit the Gulf of Oman and Persian Gulf. The Islamic Republic insists that the deployment of American military vessels only adds to regional tensions and instability, and does not make the gulf more secure, as Washington claims.