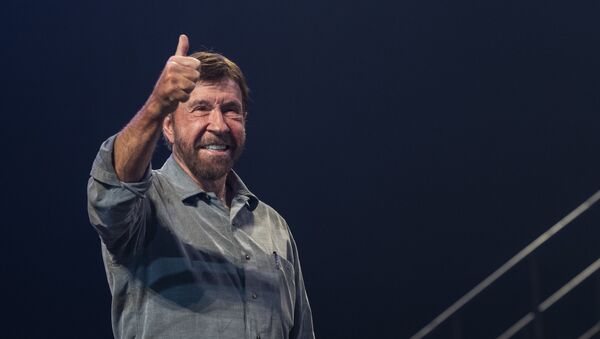 © AP Photo / Marton Monus
Subscribe
Max Gorbachev
All materialsWrite to the author
The Federal Bureau of Investigation has said it's identified 170 individuals who participated in the violent protests last week that left five people dead. The agency stated 70 people had already been charged, but said that number will rise.

Famous actor and martial artist Chuck Norris has denied he attended riots at the US Capitol a day after a photo of a person, who bears a striking resemblance to him spread across the internet. In a statement posted on Twitter, the 80-year-old spoke against violence and noted that he will always be for law and order, a reference to the character he played in the television series "Walker, Texas Ranger".

I recently learned there was a Chuck Norris lookalike at the DC Capitol riots. It wasn't me and I wasn't there. There is no room for violence of any kind in our society. I am and always will be for Law and Order.

​The actor's manager also said that his client was on a ranch with his family in Texas and noted that the person seen with protesters was "a wannabe lookalike".

I believe this was the picture posted. pic.twitter.com/aVs67r1baE

"Although Chuck is much more handsome", Erik Kritzer told the New York Post.

Norris' name was trending on Twitter on Tuesday, with many users bashing the actor for "allegedly" participating in the Capitol riots.

"F**k Chuck Norris. I ain't never watching Walker Texas Ranger again. I already don't watch it now, but I used to", wrote one user. This was one of many posts seen on social media yesterday.

Norris' statement prompted another wave of comments, with some users apologising for spreading unverified news.

I'm sorry for the confusion I caused, Chuck. I never knew you had a doppelgänger!

I apologise for what I said and thought of you. I studied martial arts because of you. I watched you compete then act, and was a huge fan of yours. And I still am! I agree w/ your stance on violence. I'm so glad that wasn't you!! God Bless.

​What Happened at the Capitol?

On 6 January, Donald Trump held a rally in Washington, DC. Addressing an audience of thousands of people, the Republican reiterated his claims that the 2020 election, in which he lost to Democrat Joe Biden, was rigged. He told his supporters to stop the steal.

"You are the people that built this nation. You have to get your people to fight", the president told his supporters.

After the rally thousands of people headed to the Capitol, where members of Congress had gathered to certify results of the election.

Trump supporters then forced their way into the building, smashing doors and windows. Five people – four civilians and one police officer – died as the result of the riot.

The FBI later said it had identified 170 individuals who took part in the storming of the Capitol and charged 70. The agency said more violent protests could occur across the United States in the days leading up to Joe Biden's inauguration.

Buzzfeed previously reported that armed Trump supporters may gather in the US capital on 19 January, one day before Biden's inauguration.

In response to the violent protests, Democrats introduced an impeachment article against the president, accusing him of exhorting his supporters to violence. Trump dismissed the move as "ridiculous" and said his speech at the rally was "totally appropriate".

The House of Representatives will vote on Wednesday on the impeachment article. If the vote passes, the article will then head to the Senate, where it will need a two-thirds majority to remove Trump from office.