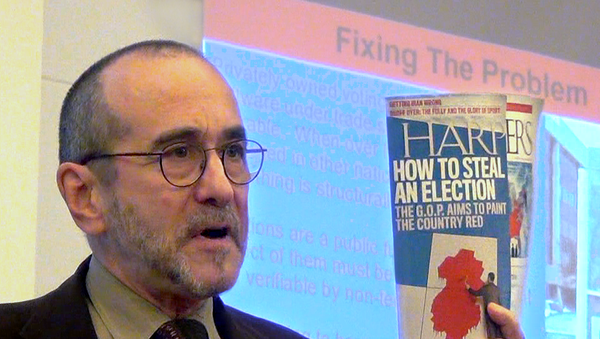 Mohamed Elmaazi
All materialsWrite to the author
Hostility to dissenting perspectives has become increasingly recorded over the past few years, but particularly since the outbreak of the novel coronavirus. One apparent victim of this shrinking space for differing views is a US professor who teaches a class on propaganda in New York City.

For years, Mark Crispin Miller, professor of media studies at New York University, has been teaching a course on propaganda, during which he encourages students to question dominant ways of thinking being pushed by media and via the government. However, Professor Miller has recently found his post at NYU to be under threat, despite having a secured tenured position, after he was accused of discouraging students from wearing masks, a charge he vigorously denies.

In a detailed interview, Professor Miller explains to Sputnik the background of his case as well as what it represents in an age where freedom of speech and academic independence appear to be under increasing attack amid the COVID-19 pandemic.

Sputnik: Explain your role as a professor at NYU and the kinds of courses that you teach.

Professor Mark Crispin Miller: I've been teaching media studies at NYU since 1997, after 20 years at [University of Pennsylvania from 1977 to 1983] and then Johns Hopkins [until 1997]. At NYU I've mainly taught a course on propaganda, and a course on film, as well as "The Culture Industries", which looks into the pressures faced by people trying to do good work in journalism, entertainment and the arts.

The courses are all quite popular with students, whose reviews are, for the most part, very positive. This fact is highly relevant to my predicament at NYU right now.

Sputnik: You've recently found yourself in a difficult situation after a student filed a complaint against you. Could you describe what led to this current situation?

Professor Mark Crispin Miller: In late September, a student in my propaganda course was enraged by my encouraging the class to look into the scientific basis for the mask mandates—specifically, eight randomised, controlled studies, conducted among healthcare professionals over the last 15 years or so, finding that masks and respirators are ineffective against transmission of respiratory viruses; and, on the other hand, the more recent studies finding otherwise. (I offered some suggestions as to how laypersons might assess such studies: by reading scientific reviews, and by noting the universities where the latter studies were conducted, to see if they have financial ties to Big Pharma and/or the Gates Foundation). I offered this as an example of how one must study propaganda—by looking into what a given propaganda drive blacks out or misreports, reviewing all the pertinent information, and deciding for oneself what's true, or likely to be true.

The student who flipped out did not speak up in class, but, a few days later, took to Twitter, to demand that NYU fire me, over my "excessive amount of scepticism around health professionals", and the "harm" that I was posing to the students' health. (I'd made quite clear, in class, that I was not telling them not to wear masks—NYU has a strict rule, which I observe myself—but that this was an intellectual exercise, of the sort essential to the study of propaganda.) She also took screen shots of several posts on my website, News from Underground (markcrispinmiller.com), and presented them as all self-evidently false, asserting that they came from "conspiracy and far right websites".

Sputnik: How has the university dealt with the complaint? What's the current situation now in respect of your position at the university?

Professor Mark Crispin Miller: The student (by her own account) first tried to get some satisfaction from the Office of Equal Opportunity, demanding that they take some action. They told her, rightly, that they had no grounds for doing so; so she went public—whereupon the university, or at least my corner of it, quickly took her side, in three ways.

First, my department chair immediately tweeted his thanks for her complaint, and added: "We as a department have made this a priority, and are discussing next steps". This was news to me, since I'm a long-time member of that department, but I was not included in whatever meeting led the chair to take that step.

The next day, the dean of the Steinhardt School (in which I teach), and the doctor who advises NYU on its COVID regulations, emailed my other students—without putting me on copy—to indicate that I had given them dangerous information, and to direct them to (what the dean and doctor called) "authoritative" studies finding that masks are effective barriers to SARS-COV-2, and sternly reminding them that they must wear masks on campus (as if I'd told them not to). Again, I too had urged the class to read those further studies; but I didn't tell them what to think. (I'd also pointed out, in class, that the CDC—the source of those links to the "authoritative" studies—had, until early April, publicly repeated the consensus of the prior studies that I had encouraged the class to read).

@nyuniversity: an MCC tenured professor spent an entire class period telling students that wearing masks doesn’t prevent the spread of COVID-19, and that hydroxychloroquine trials were made to fail so more people would be given the vaccine and have their DNA changed. thread 1/

​Finally, my chair then pressured me to cancel my propaganda course for next semester, urging that it would be better for the department if, instead, I'd teach two sections of my film course, because, he said, my film courses have high enrolments. The problem with that rationale is that my film and propaganda courses are the same size, with both of them ordinarily full up, and students wait-listed for both. Because of that, and since I've long taught the propaganda course at least twice a year (and think that it's especially relevant right now), I didn't want to do that; but I was told I had no choice, which, technically, was true.

This experience prompted me to put up a petition, in defence of academic freedom and free speech, simply urging NYU to respect my academic freedom; although I posted the petition not just on my own behalf, but in the name of all professors, journalists, scientists, doctors, activists and whistle-blowers who've been gagged, or punished for their dissidence on topics of all kinds, for decades, and especially this year. The petition quickly garnered many signatures from people all over the world (to date, it has been signed by over 27,000 people), including many eminent figures, including Seymour Hersh, James K. Galbraith, Sharyl Attkisson, Rashid Khalidi (Edward Said Professor of Modern Arab Studies at Columbia University), Robert F. Kennedy, Jr., Oliver Stone, and Chinese dissident Chen Guangcheng; and it also drew a public statement of support from Ralph Nader.

Then the drive against me escalated.

Calling the petition "an attack on the department", a large group of my colleagues sent a letter to the dean, demanding "an expedited review" of my "conduct", on the grounds not only of my heresy on masks (claiming that I had discouraged their use, and "intimidated" students who wore them), but, primarily, because of my history of abusiveness and lunacy in the classroom (and beyond). They charged me with "explicit hate speech", "attacks on students and others in our community", "advocating for an unsafe learning environment", "aggressions and microaggressions", and other crimes. Although the letter is completely false on every point it makes, the dean—prompted by NYU's lawyers—went right ahead and ordered that "review", which is, as of today, ongoing (although it was supposed to end with last semester).

I sent my colleagues a point-by-point rebuttal, asking for a retraction and apology. They ignored that request, and my follow-up email; so I decided that I had no choice but to sue them for libel, as their letter makes quite clear that their intention is to nullify my academic freedom, presumably so as to get me fired (just as that student had demanded). There's a GoFundMe page soliciting donations, to help me pay for this legal effort.

Sputnik: Have your other students been at all supportive of you?

Professor Mark Crispin Miller: Yes. In response to my colleagues' letter, and the dean's review, many students, current and former, as well as visitors to my classes over the years, have sent strong statements of support to the dean's office, pointedly rebutting my colleagues' preposterous charges. Over 50 such statements have so far come in, attesting to my tolerance, open-mindedness and—above all—effectiveness as a professor, and the importance of my propaganda classes in particular. That outpouring is the only upside to this dismal situation.

Sputnik: To what extent is your situation unique and to what extent does it represent a broader culture of censorship or intimidation within academic institutions?

Professor Mark Crispin Miller: As the petition makes clear, my plight is only one of countless others throughout academia—and not just there. Academic freedom and free speech have actually been under slow assault for decades, as many urgent subjects have long since been declared taboo as mere "conspiracy theory", so that any professors or journalists (or, for that matter, entertainers) who dare look into them risk their careers. Since that mode of censorship began in 1967, another, more explicit kind emerged with the ferocious appropriation of "social justice" as a means of "cancelling" dissident expression on a range of other urgent subjects, so that anyone who questions certain pieties is charged with "hate speech". And this year has seen a third line of attack, as the COVID crisis has entailed much of the sort of outright "war-is-peace"/"2+2=5" propaganda that Orwell satirised in Nineteen Eighty-Four, with bald lies on every aspect of the crisis pumped out by "authoritative" health officials, and the media, always in the name of "science".

And so the truth on many subjects, and those trying to express it, or even study it, are under fierce assault on one or more of those three grounds; and I see myself as under fire on all three bases. My colleagues charge that I make "non-evidence-based" assertions in my classes (a striking accusation, in a letter whose every claim is based, demonstrably, on no evidence whatsoever); assert that I engage in "explicit hate speech" (which I've never done, in class or anywhere else); and cast me as a risk to public health, for urging students to look into the scientific basis for the mask mandates, then make up their own minds.

This triune assault, I think, makes my case an important flashpoint in the larger struggle—now a global struggle—for academic freedom and free speech, at a time when both are under existential threat. I therefore hope that people will continue to support me, as well as others in my situation, in any way they can.

*The article has been amended on 12 January 2021, to make clear Professor Miller worked at the University of Pennsylvania, not Pennsylvania State University.