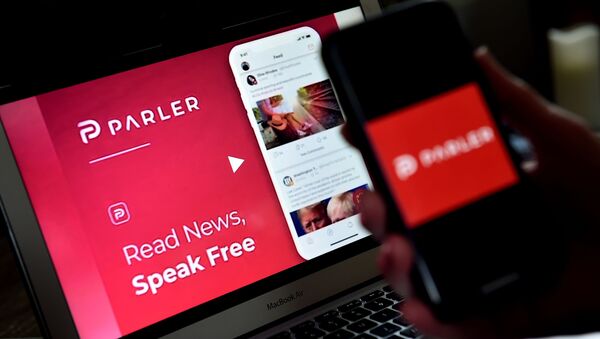 Mary F.
All materialsWrite to the author
Parler is an American microblogging and social networking service that has attracted a conservative user base, including supporters of US President Donald Trump. Posts on the service sometimes promote far-right and anti-Semitic content, as well as conspiracy theories.

Parler filed a lawsuit against Amazon Web Services (AWS) on Monday, accusing the company of violating antitrust law. Parler has also asked for a temporary restraining order against AWS to prevent it from removing Parler from its servers.

Amazon over the weekend suspended Parler from its cloud-hosting service in the wake of last week’s deadly riot at the US Capitol by pro-Trump loyalists. The web-hosting giant accused Parler of promoting and inciting violence and failing to adequately monitor content on its platform.

"Over the past several weeks, we've reported 98 examples to Parler of posts that clearly encourage and incite violence," Amazon Web Services told a Parler representative on Saturday, according to court documents obtained by NPR.

However, Parler in turn has accused Amazon of “political animus” and anticompetitive behavior.

Amazon's "decision to effectively terminate Parler's account is apparently motivated by political animus. It is also apparently designed to reduce competition in the microblogging services market to the benefit of Twitter," Parler wrote in its complaint, which was filed in a federal court in Seattle, Washington.

In an email to CBS MoneyWatch, an Amazon spokesperson disputed the claims made by Parler.

"There is no merit to these claims,” the spokesperson said.

“AWS provides technology and services to customers across the political spectrum, and we respect Parler's right to determine for itself what content it will allow. However, it is clear that there is significant content on Parler that encourages and incites violence against others, and that Parler is unable or unwilling to promptly identify and remove this content, which is a violation of our terms of service. We made our concerns known to Parler over a number of weeks, and during that time we saw a significant increase in this type of dangerous content, not a decrease, which led to our suspension of their services Sunday evening," the spokesperson added.

On Saturday, Apple announced that it was suspending Parler from its App Store, one day after Google removed the Parler app from its Play Store, NPR reported.

Trump supporters stormed the Capitol building in Washington, DC, on January 6 to protest against Congress' certification of the Electoral College votes and confirmation of Joe Biden as the winner of the 2020 presidential election. At least five people have died from injuries suffered during the riots.