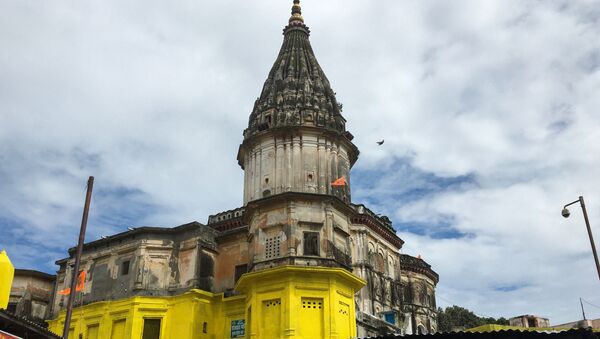 Deexa Khanduri
Sputnik correspondent
All materials
In August 2020, Indian Prime Minister Narendra Modi laid the foundation stone of a grand temple dedicated to the revered Lord Rama at his alleged birthplace in Ayodhya town. The temple’s construction will begin this month and it is expected to be completed in three-and-a-half years.

From releasing a documentary to spreading out video messages of Bollywood celebrities, Vishwa Hindu Parishad (VHP), a Hindu nationalist organisation in India, is leaving no stone unturned to reach out to Hindus and raise funds for the construction of a grand temple of Lord Rama.

The temple is to be built in Ayodhya town, located in India’s Uttar Pradesh state.

The VHP officially states that its main objective is to organise and consolidate Hindu society and serve and protect Hinduism.

Ahead of the launch of its fundraising campaign on Friday, 15 January, the VHP has circulated a 13-minute video titled “Sri Ram Janma Bhoomi Vijay Gaatha" ("Victory Saga of Ram's Birthplace of Ram").

The video begins when Mughal Emperor Babar allegedly demolished Lord Rama’s temple in 1528 and then moved on to the building of the Babri mosque and from there to its demolition in 1992 by Hindus, and the launch of the construction of the temple at the site in 2020 after India’s Supreme Court's historic verdict in the decades-old case over the disputed land in Ayodhya. Hindus claimed it belonged to them because it was ostensibly the birthplace of Lord Rama, while Muslims claimed their right to it, saying there used to be a mosque there.

India's top court delivered its judgement on 9 November 2019, handing over the ownership of the disputed land to Hindus while ordering a suitable piece of land for Muslims to construct a mosque.

"The documentary was essentially for the young generation that may not be familiar with the history of the temple movement and was being misled by vested interests", IANS news agency reported.

Meanwhile, VHP national spokesperson Vinod Bansal told Sputnik: "The fundraising activity will start from 15 January and end on 27 February. This 44-day event involves four million people who will reach out to 650 million Hindus of the country".

"We aim to cover 52.5 million villages in the country", he added.

According to the VHP, many celebrities from the film industry, including Akshay Kumar, Gajendra Chouhan, TV actors, and regional actors, will share a video message in support of Lord Rama’s temple construction.