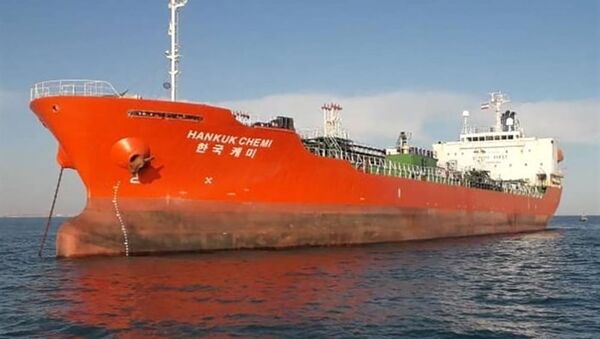 Tim Korso
All materials
Tehran authorities forced the Hankuk Chemi tanker, sailing under South Korean flag, to dock in Iran last week, suspecting the vessel of contaminating local waters. At the same time, the Islamic republic rejected accusations that it was holding the ship "hostage".

Iran's seizure of the South Korean-flagged Hankuk Chemi tanker was not a provocation aimed at the US, but rather a message to Seoul, an anonymous source - purportedly with ties to Iranian "hardline forces" - told Financial Times.

The main reason for the vessel's arrest was - according to the anonymous source - to force South Korea to release some $6 billion in payments for Iranian oil, which have long been frozen as a result of the US sanctions against the Islamic republic. The source also claimed that Tehran made the decision after lengthy talks with Seoul saw no change to the situation.

"[The Koreans] needed a slap in the face, after our quarrels bore no fruits, so they realise that they cannot block Iran’s money when we are desperate to buy medicine and vaccines. They should realise that the answer to our emails is not simply ‘we are sorry’", the unnamed FT source claimed.

The anonymous FT source added, according to the report, that as the Hankuk Chemi has been seized, South Korean representatives will have to negotiate its release and that is when Iran will whisper in their ears: 'where is our money?'" South Korean Vice Minister of Foreign Affairs Choi Jong-Kun is  scheduled to meet with Iranian authorities in the near future, according to FT.

The source further stressed that Tehran is not afraid of US retaliation for its move, citing the ongoing political turmoil in the US related to the upcoming inauguration of Joe Biden and Trump's claims that the the presidential election was rigged.

"Our calculation is that Americans cannot do anything now when their generals are busy trying to calm down Republicans and Democrats", the unnamed FT source said.

The FT source's account contradicts Tehran's official narrative, however. The Islamic republic insists that it forced the tanker into its port to investigate suspicions that the ship was contaminating the waters of the Persian Gulf. Iran also dismissed allegations by US officials that it is holding the ship "hostage", responding that the only kidnapping is being done by Seoul, which refuses to release some $6 billion of Iranian money.

The two countries have carefully negotiated to resolve the issue, but without success. Iran redoubled its efforts in 2020 due to its need for cash to counter the economic effects of the coronavirus pandemic. The sides reportedly negotiated a small shipment of supplies, paid from the frozen money, on US authorisation. However, the sides could not agree on the larger deal of using the money to buy the coronavirus vaccine for Iranians. Washington claims to have given permission to use the money without sanction consequences, but Tehran says no agreement has been reached on the matter with Seoul.