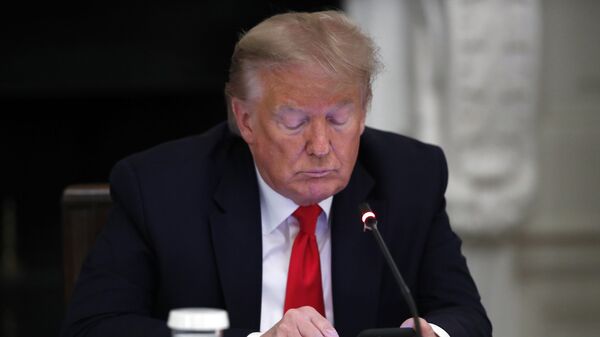 Lilia Dergacheva
All materialsWrite to the author
What started in May 2009 and was a 57,000-tweet library of emotions, news, and what not, has officially been halted. Yet there is no way netizens will stop discussing Donald Trump's – and some of his international counterparts' - social media presence any time soon and for good reason.

The internet is abuzz with talk – and certainly memes – about who else should be banned and why.

The across-the-board brainstorming has led to a string of names being mentioned – from Iran's President Hassan Rouhani to former Malaysian PM Najib Razak sentenced to 12 years in jail for corruption and abuse of power.

Both have been overly, as it has been claimed, outspoken on social media, with the latter, for instance, recently stirring up the public for saying Muslims "have the right to kill millions of French people" after a knife-wielding Islamist murdered three people in a church in Nice.

Is it just Donald Trump that Twitter has culled today? I' ve lost 600 followers!

I see they still allow President Rouhani to keep his account, though.

Rouhani, for his part, is using Twitter to incite violence "against gays, against Israel, against women", wrote LB presenter Iain Dale, querying: "Shall I go on?", in response to a commentator in his thread.

"Did President Rouhani just incite insurrection and at attack [sic] on the US Capitol as Trump has just done?", another asked, prompting Dale to reply with quite a bit of satire:

"No, he just sanctions throwing gays off buildings and subjugating women. But hey, that's Ok then".

Many more followed suit posting similar views, and bringing up Venezuela's Nicolas Maduro and Nicaraguan President Daniel Ortega as other no less desirable picks for a Twitter ban:

While I agree with Trump's ban, I'd just like to point out that other, more dangerous leaders, such as Khamenei or Maduro aren't.

Why they banned Trump and dont ban Nicolas Maduro from Twitter?

The world wide web also has some really hot takes on Trump's ban proper. Irrespective of what side of the aisle netizens are on, they are apparently able to have a decent laugh about these:

Trump trying to get White House staffers to let him use their Twitter accounts pic.twitter.com/fQ0ZPGBvKa

Some man called me to ask if he could tweet on my account but I said no.

"Oh no where will Robert Pattinson get dating advice now?", another queried referring to Donald Trump as the budding Twitterian who back in 2012 advised Pattinson "not to take back Kristen Stewart" because "she cheated on him like a dog".

Oh no, where will Robert Pattinson get dating advice now?

Someone else suggested he is now "furiously googling 'how to become a tik-tok teen'". Well, no one knows if president Trump might indeed have some readymade dance moves for the Chinese social network.

Trump says he will launch his own Social Media Site. Would you sign up?

….and the question remains open which other known social networks will go back on the ban of the outgoing president.

When Trump tries to login into his social media accounts pic.twitter.com/FeJtE5w19M

Yet, the cherry on top is arguably POTUS' well-known impersonator John Di Domenico's effort – a video titled "Trump Twitter Meltdown with Melania Leaked Video", which he said is his "FASTING Growth YT video Ever" with over 82,000 views in 4 hours. Sit down comfortably and enjoy:

Trump melts down after Melania will NOT let him use her phone to tweet! pic.twitter.com/4XLnGqc38R

Since Melania "turns him down", another option is perhaps to ask Barron, their teenaged son: