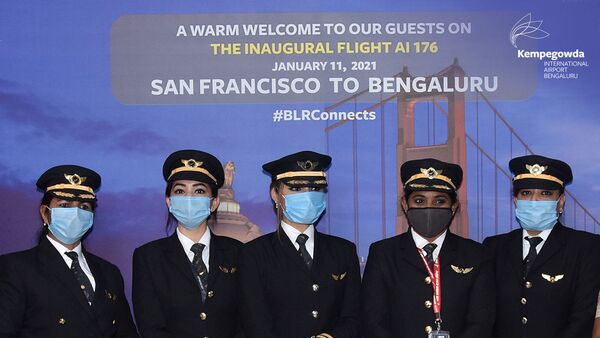 Priya Yadav
All materials
The epic new route flying 14,000km from San Francisco on the west coast of the US to Bengaluru will come as a tremendous relief to regular travellers since it puts paid to the old stopovers either in India’s national capital New Delhi or the financial capital Mumbai, which always took hours and was regarded as a tedious waste of time.

It was a flight of firsts by all accounts: the longest flight ever achieved by an Indian airline which had an all-woman crew.

The flight landed at India's Bengaluru city from San Francisco, US, early Monday having flown over the North Pole and covered nearly 14,000km non-stop in 16 hours - actually arriving at its bay 20 minutes before the scheduled time.

The five-member team led by Captain Zoya Aggarwal emerged from the arrival gate to a round of applause by passengers and visitors to the airport as an acknowledgement of their historic accomplishment.

Netizens too have poured forth congratulatory messages to the crew even as the Kempegowda International Airport, Bengaluru, the capital city of Karnataka state, put out images of the team on Twitter.

The #FlightOfFirsts AI176 landed at #BLRAirport earlier today, powered by an all-women cockpit crew. We are the first #Airport in South India with a direct, non-stop flight to be #USA. Stay tuned for updates! Read more: https://t.co/gTQjT4ong0 @airindiain @MoCA_GoI @HardeepSPuri pic.twitter.com/rBs2uD5Zua

A clutch of Indian politicians including Rahul Gandhi of Congress Party and Nara Chandrababu Naidu, chief of Telugu Desam Party, took to Twitter to congratulate the team and Air India over the feat.

Congratulations to @ZoyaCaptain and her all-women @airindiain crew that scripted history by flying the San Francisco-Bengaluru flight, over the North Pole. We're proud of you!https://t.co/lhvrx3sLxo

Congratulations to the all-women cockpit crew for completing Air India’s longest flight from San Francisco to Bengaluru over the North Pole.
You have made the country proud. pic.twitter.com/OPiEzoOrsk

Best wishes to this all-star team of pilot women on an unprecedented endeavor in air travel. You have made us proud. Blessings. -Sg #AirIndia @airindiain https://t.co/fqRZEMbHpp

Congratulations to Capt ZoyaSapraAgarwal & her all-women crew who will undertake @airIndiain's inaugural flight from Bengaluru to SanFrancisco! https://t.co/MsGpR6ZJia
This will be one of the world’s longest flights, connecting two Silicon Valleys in the US& India! Godspeed Zoya!